What are May’s birthstones? What are their meanings and symbolism?

May is the fifth month of the Gregorian calendar. It is springtime in the Northern Hemisphere and fall in the Southern hemisphere. May houses two zodiac signs of distinct personalities and affinity: Taurus and Gemini. The May birth flowers are Lily of the Valley and Hawthorn.

Etymologically, it is commonly believed that May was named in honor of the Greek goddess Maia. According to legends, Maia was the embodiment of growth and progress. She was a nurturer which isn’t unlike May that provides a favorable climate for lives to thrive.

Early May spots the peak of Eta Aquarids, an annual meteor shower that originates from the famous Comet Halley (1P/Halley). The spectacular astronomical phenomenon is visible both from both hemispheres.

Throughout history and across different cultures, the month of May has found itself in association with various gemstones. Commonly referred to as birthstones or natal stones, they’re a subjective list of gemstones that are constantly changing. For the purpose of this article, we’re picking three gemstones to represent May: emerald, agate, and sapphire. 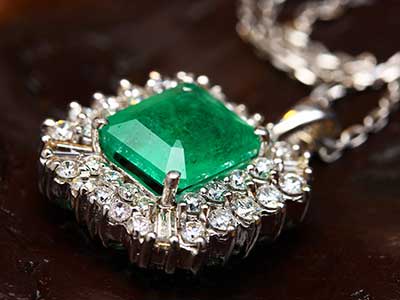 The name ’emerald’ was derived from the Greek word ‘smaragdos‘ which means ‘green gem.’ The first documented emerald was mined in Egypt in 1500 BC and was estimated to be over 2 billion years old.

Emerald gained itself a flattering title “The Jewel of Kings,” because it was favored by kings and other royalties. Among the royal aficionados of the green gemstone was the famous Egyptian queen Cleopatra. When she’s not entangled in Roman-Egyptian politics, Cleopatra was passionate about a few things. Among them were rose and emerald. Emeralds were worn by Cleopatra as adornments. Her palace was decorated with emerald. It was also given out as gifts to foreign dignitaries.

Emerald’s soothing green color has a calming effect. One could reasonably speculate that its luscious green reminds us of Mother Nature. This is a fitting birthstone for May because it is the time when the fields will be shrouded in the color of the emerald.

Emerald is a symbol of wisdom, intelligence, growth, fertility, immortality, and longevity. In Vedic astrology, emerald is connected to Mercury which is the planet of intelligence. It is believed that the stone has the power to grant its wearer strong wit that can help in areas such as communication and negotiation. The green gem is also believed to bring prosperity and abundance. Spiritually beliefs say that it is a powerful stone that promotes regeneration and recovery as it is aligned to the Heart chakra.

Emerald is also a popular option for engagement rings and one of the best alternatives to diamonds. It is believed that the stone encourages fidelity and a blissful marital life. The gemstone is the traditional 20th Wedding Anniversary stone and it symbolizes the everlasting love of couples that only gets better through the years. 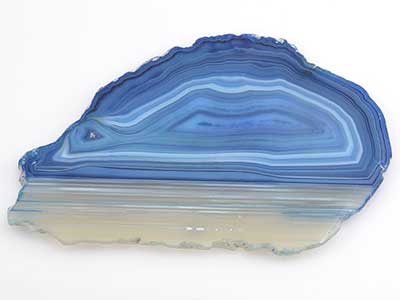 Above: Agate and its banding. Credit: malachit-obchod@Pixabay

Agate is the traditional May gemstone. It is an opaque, semi-precious stone that comes in diverse patterns and colors. Due to the way it’s formed, agate is generally a banded stone. The banding distinguishes agate from other members of the chalcedony gem family such as jasper and bloodstone.

As mentioned, agate is found in a diverse spectrum of colors and patterns. You can find them in colors ranging from amber, bright blue, to deep black.

In his thesis On Stones, Greek philosopher Theophrastus said that agate got its name from Achates, a river in Sicily now known as Acate or the Dirillo, where the stones were sourced. The rock is still found in that region to this day.

Agates have found uses in many other areas such as decoration and adornment. Specifically, agates had been incorporated into necklaces, earrings, rings, and rosary beads; they are utilized to create decorative spheres, hearts, and eggs. Thanks to their durability and visual pleasantness, agates were used as basins or bowls in ancient times. Abundant specimens of these basins can be seen and enjoyed in European museums up to this day.

The month of May is ruled by the astrological signs Taurus and Gemini which are both associated with the agate stone. Those who were born under the astrological sign Taurus are known to be prudent and reliable. Wearing an agate gem can help them increase their productivity. It can also keep them inspired in fulfilling their plans and goals for the future. The Geminis can also benefit greatly from this stone. Those who were born under this astrological sign are known to be flexible and quick-witted but they can also tend to be nervous and inconsistent. Wearing an agate stone can aid them in remaining calm and focused. The soft vibration of this stone promotes a well-balanced life by harmonizing the Yin and Yang energies.

Although some agate can be very expensive, it is on average less expensive than the other May birthstones, emerald and sapphire. This makes it perfect as a more affordable gift for May birthdays and as a decorative birthstone. 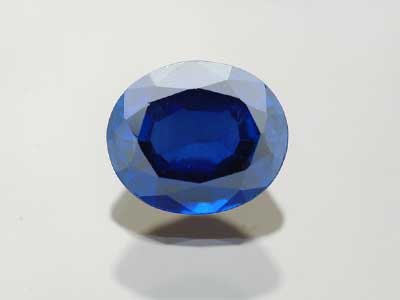 Sapphire is the mystical birthstone for May. It belongs to the corundum gem family. Although the word sapphire often brings up the image of a blue gemstone, it can exist in many different colors, such as orange and green. However, a special case exists for the color red. Instead of being a red sapphire, red corundum has a unique designation—ruby.

Sapphire symbolizes intelligence, knowledge, nobility, wisdom, truth, and sincerity. The blue gemstone is also believed to protect its owner and has healing powers.

For over a thousand years, this gem ruled as the May birthstone in the Tibetan civilization. It is purported to provide mental clarity and emotional stability. Sapphires were used by the Tibetans as prayer beads to facilitate prayer and meditation. In Buddhism, the precious gem is believed to promote spiritual enlightenment, especially the blue sapphires.

In the Middle Ages, clerics adorned blue sapphires because it was believed that the gemstone was connected to heaven. 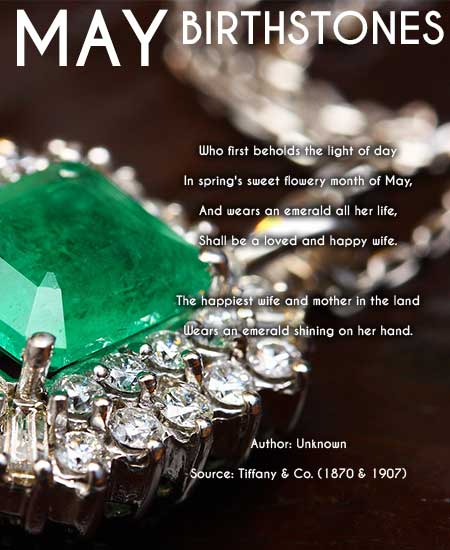 Who first beholds the light of day
In spring’s sweet flowery month of May,
And wears an emerald all her life,
Shall be a loved and happy wife.

The happiest wife and mother in the land
Wears an emerald shining on her hand.