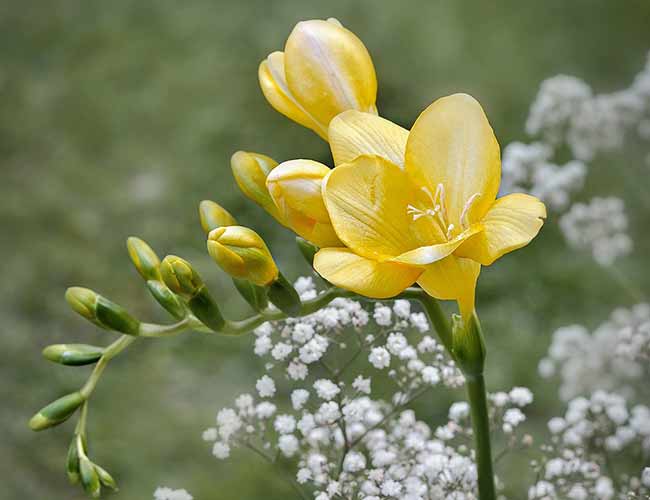 What are the birth flowers of Aquarius? What are these Aquarius flowers’ meanings, symbolism, and myths? Find out below.

It’s funny how the universe works. In January the wheel of the zodiac moves from the serious Capricorn to the creative Aquarius. They’re polar opposite in so many ways. Born under the quirky and rebellious influence of Uranus, Capricorn (January 20-February 18) folks are free-spirits who don’t want to be tied down by what is “normal” or conventional.

Deeply empathetic and kind, people often confuse Aquarius with a water sign. An honest mistake considering that their symbol is the water-bearer, but they are an air sign. However, where Libra and Gemini are often considered flighty or to have their heads in the clouds, Aquarians have their heads in the cosmos. They are often searching for enlightenment and how to bring themselves into better harmony with their environment. While they would love a natural gift like flowers, something traditional like roses or lilies isn’t quite their style. Pick something as unique and eye-catching as they are. Whether you’re looking for a gift for Aquarius, or you’re an Aquarius who’s looking to learn more about flowers that are connected to you spiritually, here are the five Aquarius birth flowers. 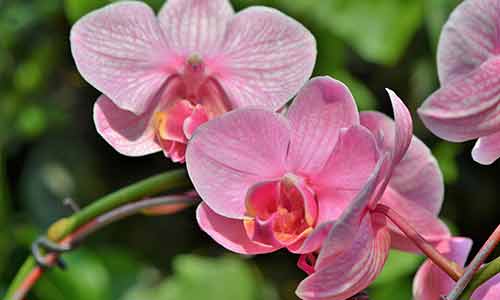 Above: Orchid. Image by Capri23auto from Pixabay

Orchid is the official birth flower of Aquarius. It is one of the most sought-after and prized ornamental plant. This distinct flower is a symbol of luxury, love, strength, and beauty. Because of the origin of its name, the orchid also symbolizes fertility and intimacy. When given as a gift, the orchid’s message range from affection, friendship, or kindness–depending on your relationship with the recipient.

Orchids are distinct flowers that set itself apart from other flowers with their willowy stalks, unique shape, and vibrant colors. Similarly, Aquarius stands out from the crowd because they are probably wearing something funky, or their hair has a bright pink streak. With that regard, orchid is a perfect flower for Aquarius. Perfect as a gift to give and receive, or as a print to wear, or even as wallpaper for Aquarius’s bedroom.

Above: Snowdrops in Spring, taken in Thun, Switzerland by André Lergier.

Snowdrop is the birth flower for January Aquarius. This unique flower looks exactly as its name suggests, delicate and pearly white. Its innocent appearance has earned itself a reputation as a flower of sympathy or condolences. In the language of flowers, the drooping-bell-shaped flower can also mean acceptance and forgiveness. The snowdrop’s interpretation is not dissimilar to Aquarius’ traits

Known for their accepting and empathetic nature, Aquarians feel others’ pain strongly and are relentless humanitarians. These are the folks you will find helping out at a local food bank or on the front lines of a protest. Whether it is animal rights or equal rights, people born under Aquarius cannot tolerate the suffering of others and will gladly devote their time and energy to fixing the wrongs in the world. Because they are so aware of the suffering in the world Aquarians tend to be a bit cynical, they want to make things better, but don’t always have faith that others are willing to put in the work to make the changes. 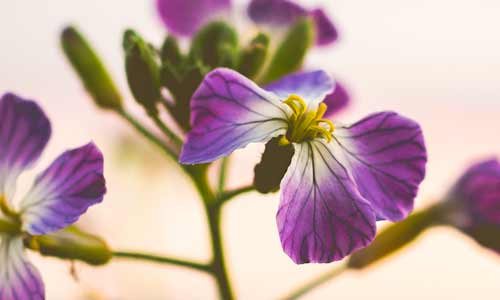 Viola is the birth flower for February Aquarius. The viola is a symbol of spiritual wisdom in many faiths. These sweet purple flowers call to the deep spirituality you will find in Aquarius. Being a diverse group of flowers, the viola can also be found in many other colors. In many cases, the viola flower can contain a spectrum of different colors! An instant example is the heartsease (viola tricolor) that puts on display the mixes of three colors.

Going back to Aquarius. They are deeply connected not only to the earth and the world around them, the water-bearer sign is also in tune with the universe and the larger picture of their existence. These are the folks most likely to gift you a crystal as a housewarming present or pull out a deck of tarot cards when you ask their advice. Aquarians are often a bit nomadic, wanting to follow their passions and see where life takes them. Do you know that girl at the farmer’s market who wears beads in her hair and lives in a modded school bus? She’s probably an Aquarius.

The viola is a lucky flower for Aquarius. 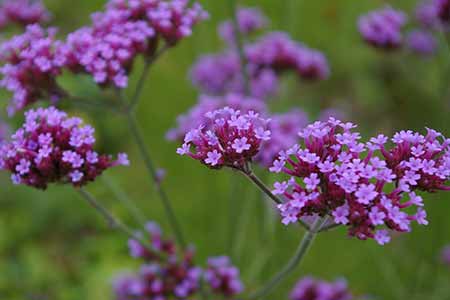 Above: verbena in the wild. Original image by Kerstin Riemer from Pixabay

With their empathetic hearts and gypsy souls, it doesn’t come as a shock that Aquarians are overflowing with ideas and a desire to create things. Like flowers in the verbena family burst forth in large bunches from a slim stalk, Aquarius gives it their 100% without holding back for their passion. Their commitment is sometimes found directed toward people they love. Other times, Aquarius focus their attention on creating art. Aquarius is perhaps one of the most creative signs.

This doesn’t mean they are the starving artists with worn-out paint-splattered clothes. They’re more than likely to make a living out of their creativity. Aquarians make excellent photographers, authors, and even architects. There are countless ways to use your creativity to create new art and to break new ground. This productive creativity is embodied and symbolized by the verbena. Aside from being a symbol of creativity, verbena has also long been used to ward off evil or bad luck, which would make it even more awesome as a gift for Aquarius. 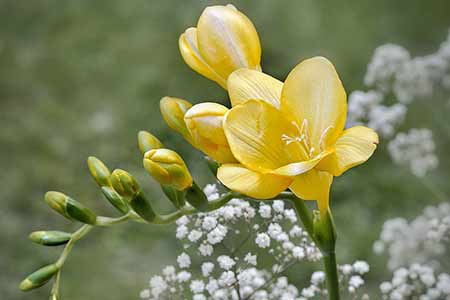 Above: Freesia. Original image by Pezibear from Pixabay

Freesia comes in a rainbow of colors. The flower is a symbol of trust, something that Aquarians value in themselves, as well as those they love. If you have an Aquarius in your life, they are most likely the person you can be your most authentic self around, without fear of judgment. You can trust that they will love you, quirks and all. And all they ask in return is that you give them the same in return. Accept them at their most eccentric, and you can be sure that you will always have someone in your corner when you get a wild idea to pierce your nose or move to Italy for the summer. Just like verbena, freesia is also a lucky flower for the Aquarius men and women.