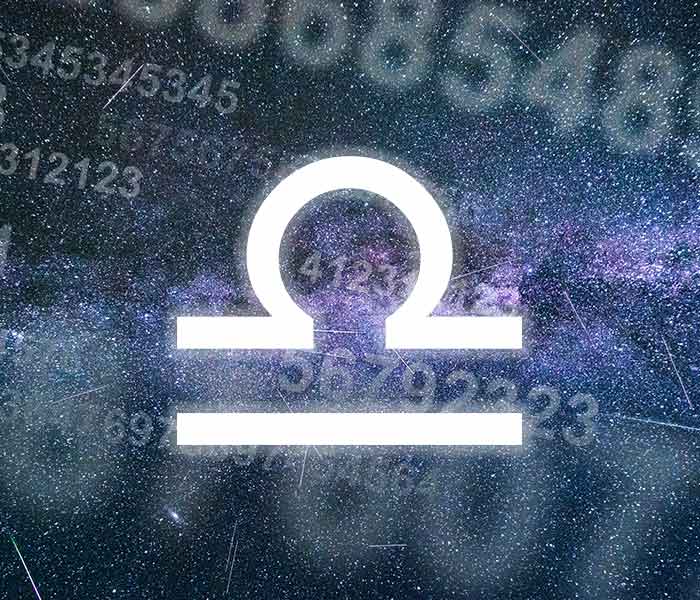 A Cardinal sign ruled by Venus, Libra is represented by the Scales of Justice. Venus speaks of balance, beauty, harmony, and creativity. In Libra, this energy manifests as a desire to compromise, love, create balance, and feel attractive. Libras overall tend to be charitable, fair, and equitable.

Whether it is their social circle, partnerships, or friendships, Libras strive to find balance. They are often misunderstood and stereotyped as indecisive people, but the Scales simply like to consider all their options.

Libras find comfort in peace and avoid arguments and confrontations. Like other Air signs, Libras gravitate towards ideas and idealism and sometimes need some help to direct them towards practicality.

A Libra can find all the guidance they need through their “lucky numbers.” Lucky numbers are the most significant numerological findings to be considered in a Libra’s life. These numbers give an insight into who someone is at this point in their life and indicate traits that are currently active in their personality.

Lucky numbers outline which choices will make one’s life easier, and also speak of the dominant aspects of oneself and how they influence someone’s life. So, lucky numbers might not help someone win the lottery, but they may offer a bit of peace in little things in everyday life!

Lucky Numbers That Favor Libra: 3 and 8

For Libras, Numbers 3 and 8 speak of luck and fortune. These numbers can bring Libra favors and blessings from the Universe.

Always the refreshing, lively person, Libra, guided by number 3, is the easy-going friend. Libras influenced by Number 3 are dazzling, famously fashion-savvy, and aesthetically intuitive. They become even more outgoing and creative than usual.

3 can inspire Libras to express themselves through their attire, personality, and activities. You will often find Libras in the art and entertainment industries because of how well they grasp the essence of this work. However, under the same influence of 3, Libras can sometimes be pretty dramatic and don’t usually give up the chance to enjoy some gossip.

The most interesting number in Numerology would perhaps be the number 8. It is the symbol of Infinity in mathematics and holds limitless depths to its character. Under the influence of 8, Libras are charismatic, determined, and fully own their beliefs. These Libras can become fierce fighters for equity and justice.

Under the influence of 62, Libras are people-oriented and love to work in teams. This makes them genuinely helpful and easy-going colleagues.

Libras often gravitate towards a role that has roots in mediation. They are natural mitigators and make excellent advisors. Under the influence of Venus and 62, they can become your go-to people to wine and dine with, seal client acquisitions, and charm the whole office. The sociable Air sign energy, along with 62’s vibrations, makes Libras great at their jobs.

Libras are good managers of their finances, but they have to enjoy a few luxuries once in a while as well. 62 can make them open to spending what they have worked hard to earn, which is necessary for finding balance in the “work hard, play hard” spectrum.

Libras are an organized bunch when it comes to domestic life, and family and order are essential to them. Thus, guided by 44, Libras strive hard to maintain the harmony and peace of their family. Libras are also prone to subconsciously expecting too much from family members and loved ones and can often feel disappointed when their expectations are not met.

It is essential for Libras to realize that they need to be aware of their thoughts and where they place their expectations. Libras also withdraw from members of the chosen or original family once a conflict emerges. However, 44 can guide them to cope with challenges by seeking help rather than retreating.

Their sense of justice and sensitive personality — and 44’s influence — can make them best-suited to be nurturing and compassionate loved ones and family members.

The number 53 can influence Libras to be charming and great conversationalists. People naturally gravitate towards Libras guided by 53. It is not a surprise that this is how they find their romantic partners. Their charm and understanding make them a great catch, especially if both partners look forward to a long-term relationship.

Libras guided by 53 also understand that love doesn’t conquer all, and that work needs to be done to make anything flourish. Libras will happily put in the effort to see their relationship healthy. This sign is also very affectionate and showers their partner with affection, which keeps the spark alive.

Under the influence of 53, Libras may not be very good at confrontations, but they communicate their distress and expectations clearly. For Libras, relationships are about respect, trust, and remaining true to themselves, among other things.

Libras have an innate beauty and grace that is charming to the people around them. Their lives can be very stable, with long-lasting and balanced relationships with the help of number 53.

Sometimes, Libras can expect a lot from people close to them. 44 will urge them to be rational; your family doesn’t have the necessary omniscience to see what you expect of them!

Finally, 62 can influence them to be interested in knowledge, discourse, and achievements. Overall, Libra’s lucky numbers can allow them to look for new experiences to gain knowledge and be joyful in life.