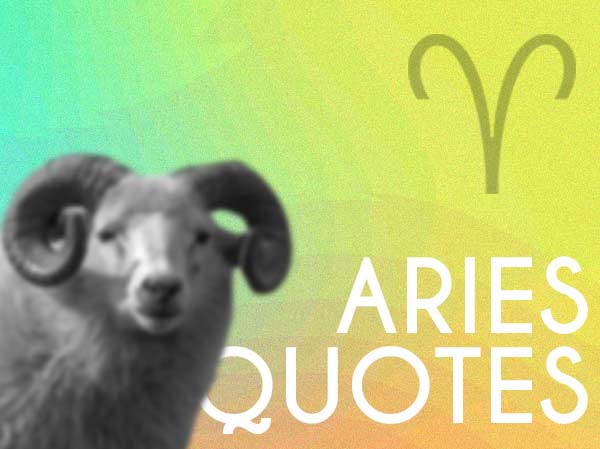 Passionate, energetic, and enthusiastic, Aries is some of the most action-oriented extroverted go-getters. Arians are straightforward with their words and thinking. They are extremely direct to the point of almost naivety – but they are anything but naive, Aries just don’t find unnecessary diplomacy that important to them. Being the first sign that kicks off the zodiac wheel and the first cardinal sign (among fire signs and all cardinal signs), Aries is used to being number one and this bestows upon them the natural ability to lead and become pioneer in the fields of their choosing. In this zodiac quote collection, you will find quotes about Aries that you’ll find interesting.

Whether it’s backpacking around the world, launching a business, or training for a marathon, once an Aries sets a goal, they will achieve it. 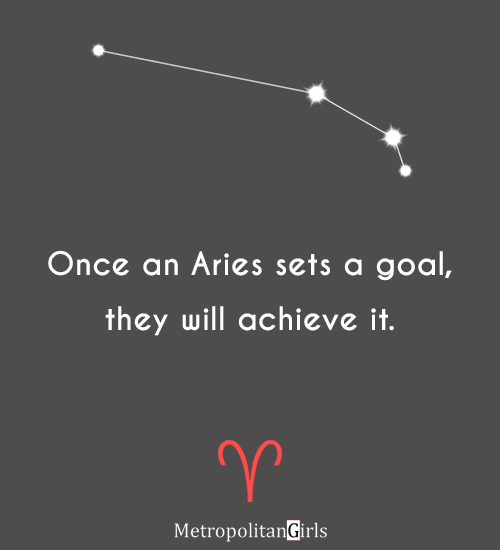 You’ll rarely meet an Aries who isn’t capable of finishing several things at once, often before lunch break!

Aries is known for an explosive temper, and although their outbursts don’t last long, it’s definitely best to avoid fiery rams until the steam has dissipated.

All Aries need to do in order to succeed is follow their chosen path and not give up on professional plans guided away by emotions. 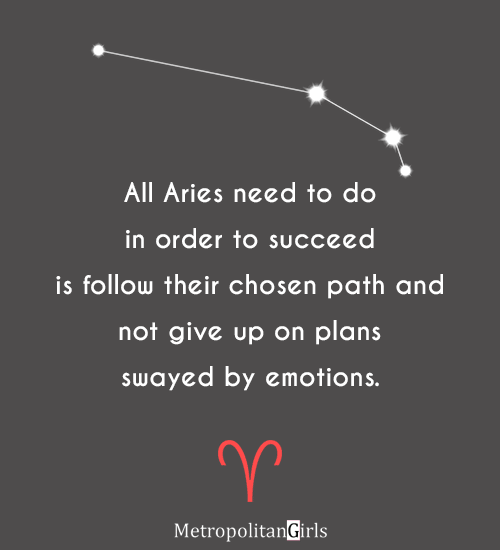 Since people born in the sign of Aries easily enter communication, direct and honest in their approach, they will make an incredible number of connections and acquaintances in their lifetime.

An Aries will always tell you what they’re thinking, with a frankness that may occasionally border on rudeness.

As Rams are always battle-ready, people born under the Aries sign can have quite the temper.

Slowing down is tough for Aries. The Ram’s mind goes a million miles a minute, and slowing down for others can be excruciating. 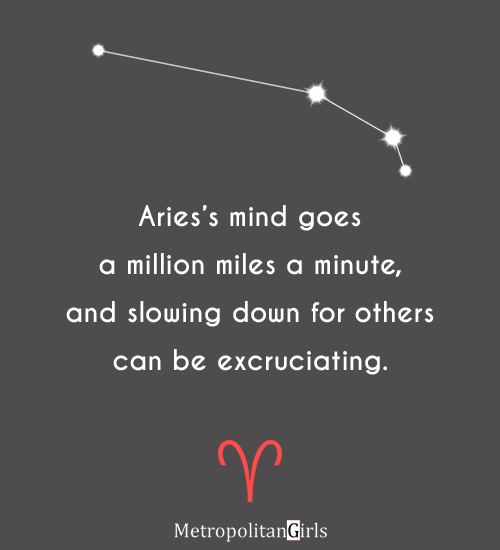 Arieses possess youthful strength and energy, regardless of their age and quickly perform any given tasks.

Forthright and unabashed, an Aries will do everything in their power to go after someone they want.

As children they can be hard to control, and if they don’t receive enough love and patience from their parents, all of their intimate bonds later in life could suffer.

Passionate and independent, Aries are leaders not followers — Aries will never do something just because everyone else is doing it. Aries also hates being told what to do. 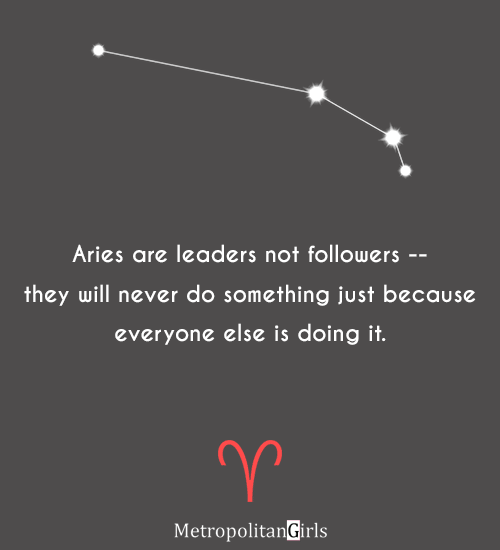 When Arians fall in love, they will express their feelings to the person they are in love with, without even giving it a considerable thought.

Those born under the Aries star sign are often called the pioneers of the zodiac, and it’s their fearless trek into the unknown that often wins the day.

A natural born leader, Aries will prefer to issue orders rather than receive them.

Aries is one of the most active zodiac signs. It is in their nature to take action, sometimes before they think about it well.

Aries children are known for being active and assertive, traits that can cause them to butt heads with their peers and exhaust their parents.

Aries live in the present and aren’t that focused on the future, and this can make them irrational and hasty when it comes to financial decisions.

Aries is in polarity with the cardinal air sign Libra. Ruled by Mars, Aries likes to confront and conquer, where Libra, ruled by Venus, likes to connect and keep the peace.

An Aries is ready to be the hero of the day, fly away and carry many endangered, powerless people on their back.

Independent and ambitious, an Aries often knows where they want to go at a young age, separating from their family a bit early.

Aries’ fire element is responsible for their energetic nature, passion, and creativity.

The leadership displayed by Aries is most impressive, so don’t be surprised if they can rally the troops against seemingly insurmountable odds—they have that kind of personal magnetism.

Aries loves to be number one, so it’s no surprise that these audacious rams are the first sign of the zodiac. 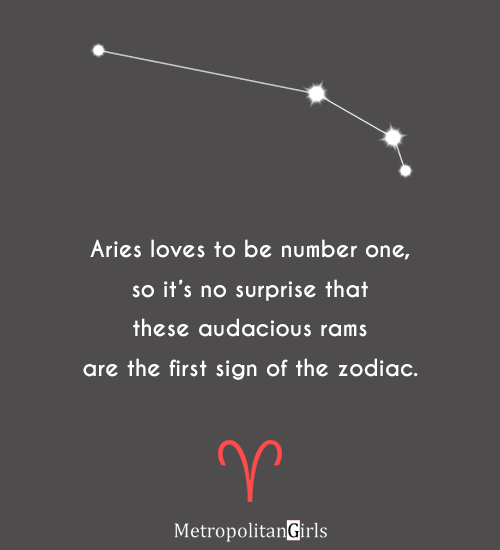 Aries folks are impulsive. Sure, sometimes acting first and thinking later is risky, but more often than not, it leads to a once-in-a-lifetime opportunity.

Arieses’ determination is unmatched when it comes to getting what they want.

When it comes to the workplace, the natural leadership abilities of an Aries can be a tremendous asset.

Uncomplicated and direct in their approach, they often get frustrated by exhaustive details and unnecessary nuances.

Aries folks are continuously looking for dynamic, speed and competition, always being the first in everything – from work to social gatherings to academic achievements. 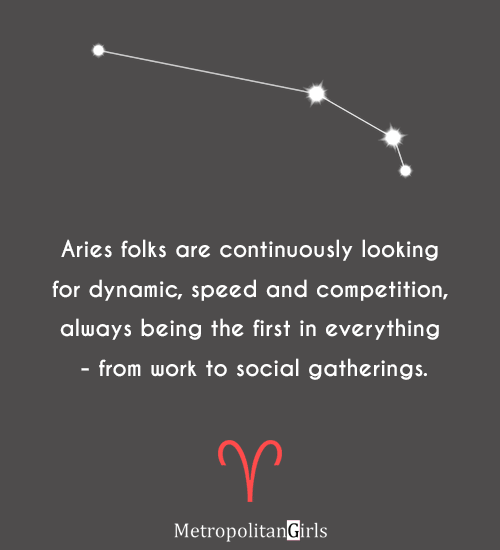 Aries is a cardinal sign that kicks off not only the spring season but also the entire zodiac wheel.

Aries signs are known for being overly competitive and seeing everything as if it were a fierce fight to the death.

Rams are very loyal to family and friends, even if they don’t always reach out regularly. Aries find happiness in having loyal friends.

Aries are amazing lovers: versatile, passionate, and always invested in the moment.

Bold and ambitious, Aries dives headfirst into even the most challenging situations.

Aries the fire sign think after they leap, which often results in lessons learned the hard way. 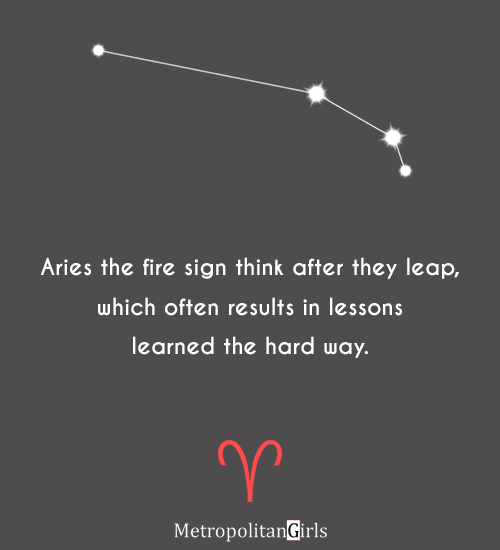 Social life of an Aries representative is always moving, warm, and filled with new encounters.

Aries is easygoing and enjoy the company of all kinds of people.

This sign is ruled by Mars, the dynamic red planet named after the Roman god of war.

Aries is the most courageous and ambitious sign, the leader of every pack.

Arieses work hard but also play hard — they’re the life of every party!

Passion reigns supreme for an Aries in love, and cuddling on the couch, which sounds cozy to some, sounds less than ideal to an Aries.

When in love, every Aries tends to become jealous fairly easily and have no problem making that clear to their lover.

Aries men and women can sometimes be relatively aggressive and domineering partners, but it’s done in a genuine, enthusiastic and bold manner.

This wildly flirtatious fire sign certainly takes the initiative when it comes to romance.

Aries don’t generally play mind games, and you will typically know exactly where you stand when dating an Aries. 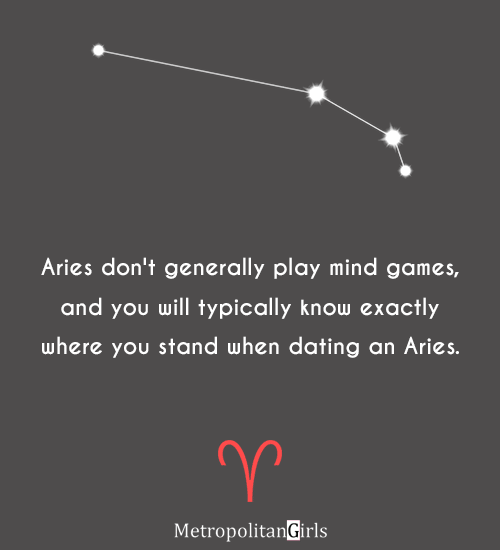 As long as there’s plenty of spice and excitement to keep the blood pumping, the relationship will be strong and long lasting for the Aries.

An Aries in love is like a kid with a newfound toy. The women seduce while the men charm and dazzle, and both can sweep the object of their affection off his or her feet.

When an Aries is in love with someone, they become softer and more loving and can’t seem to get enough of the other person.

It’s possible for an Aries to want too much togetherness when they are in love. Even then, an Aries needs space to breathe and be themselves if the love is to last.

Aries of both genders often fall in love many times and make many mistakes before they finally get it right. 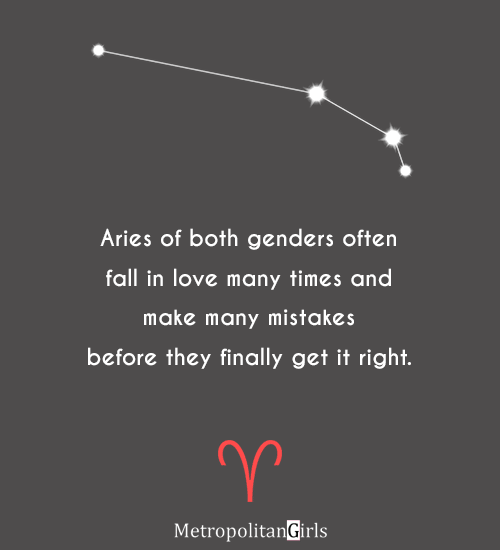 To keep an Aries’ attention, their partner needs to be as energetic and as exciting as they are.

The Aries outgoing and friendly manner is often welcomed in social situations, and they typically have a wide selection of friends who welcome their enthusiasm and energy.

Aries men are mischievous but not devious, sometimes foolhardy but never fools, egotistic but not selfish, seriously sexy, and extremely fun to be around.

The Aries man is one that makes you breakfast in bed, sends an enormous bouquet of flowers to your job, and gives you handwritten love notes on a whim.

An Aries man knows what he wants immediately, and goes after it with zero hesitation.

Stubborn as the Ram that symbolically represents him, the typical Aries man is a warrior for what he believes to be right and true. 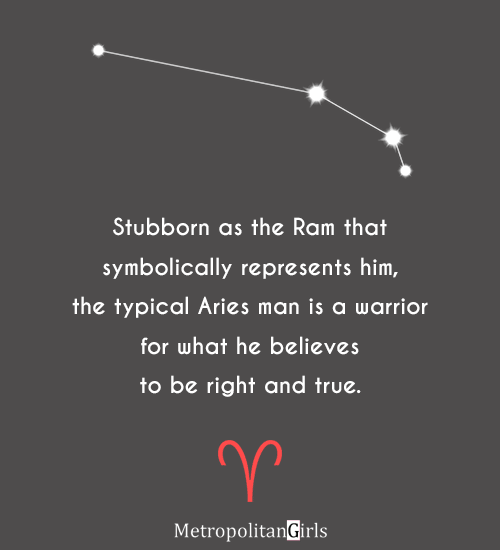 The Aries man is a natural trailblazer and is interested in all things new, which lends him his intrinsic childlike curiosity and creativity.

With driven, passionate, and courageous personalities, Aries men are movers and shakers who make big things happen in their careers and communities.

An Aries man lives for adrenaline, change, excitement, and novelty – so if you want to give him gifts, choose skydiving lessons, martial arts classes, or an exciting surprise vacation to somewhere he’s never been before.

Aries man is attractive, strong, and confident, always ready for something new and exciting. He doesn’t lack initiative or character and it is a fun competition to win his heart.

For more quotes like these, check out this Aries men quote collection.

Aries can talk politics with intelligence, business like a boss, and still remember the way you like your coffee.

The Aries woman always at the front of the queue and kick-starting everything from projects to dinner dates.

Whether it’s a friendship, romantic, or professional relationship, equality is essential to an Aries woman.

Eager and enthusiastic, the Aries woman is the alpha female of the pack.

Fun, free-spirited, and fiercely independent, the Aries woman is a breath of fresh air – a brightly burning candle in human form. 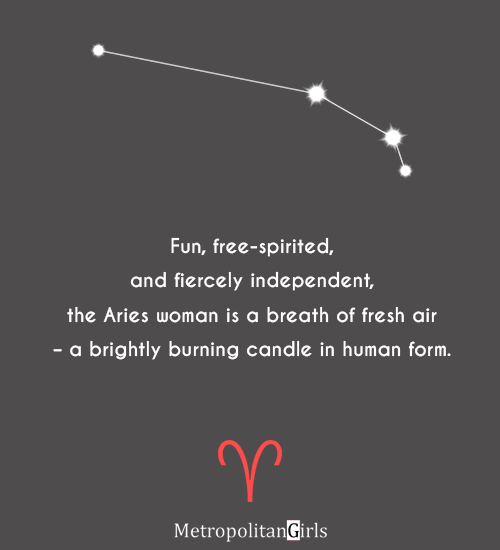 Aries women are natural super-achievers. It often doesn’t take much exertion for them to accomplish a good deal of success.

“Let’s get started!” is an Aries woman’s battle cry.

Aries woman insists on having complete freedom throughout life.

The Aries woman projects a sense of radiant confidence and seems to glow with an inner light.

Aries ladies have their own way of seeing the world: They often call it like it is, eagerly pointing out when the emperor is wearing no clothes.

The Aries woman is quick to anger but also quick to let her anger go.

For more quotes like these, check out this Aries women quote collection.

It is good to love many things, for therein lies the true strength, and whosoever loves much performs much, and can accomplish much, and what is done in love is well done. – Vincent van Gogh (March 30, 1853) 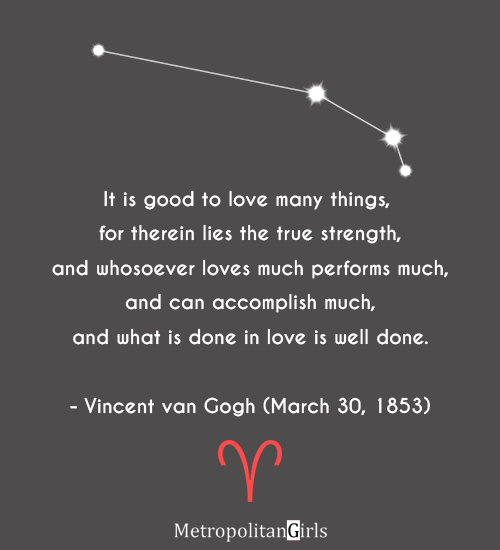 One can have no smaller or greater mastery than mastery of oneself. – Leonardo da Vinci (April 15, 1452)

Never, never listen to anybody that try to discourage you. – Mariah Carey (March 27, 1970)

What you do makes a difference, and you have to decide what kind of difference you want to make. – Jane Goodall (April 3, 1934)

You may not control all the events that happen to you, but you can decide not to be reduced by them. – Maya Angelou (April 4, 1928) 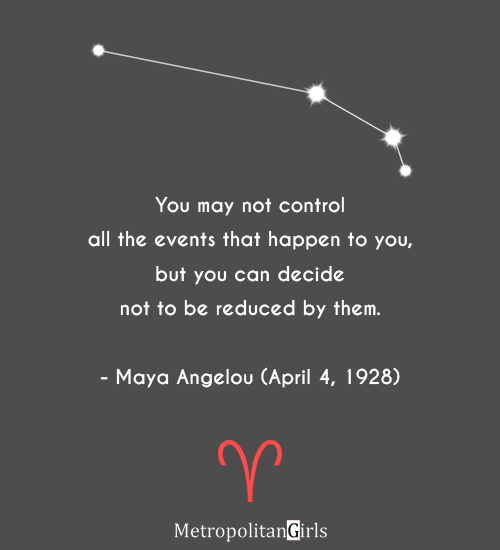 People rise out of the ashes, because, at some point, they are invested with a belief in the possibility of triumph over seemingly impossible odds. – Robert Downey Jr (April 4, 1965)