Who really likes being told what to do? The bet is that no one does, even if there are plenty of people who do as you say anyway. Those who follow your commands are doing so out of obligation if that is what they are thinking, or that they just are the type to be people-pleasers.

In the world of astrology, there are some zodiac signs who are just not people-pleasers and don’t feel guilty for not listening to orders given by others. These sun signs hate it when being ordered around and will try their best to ignore orders.

In the list below, you will find some signs that you won’t be able to order around easily and what is their response when you don’t back off. Unlike the other lists we’ve done previously, such as the which signs are the biggest food lovers article, this time the signs are loosely ranked. That means we’re starting the most stubborn to the least stubborn, but it’s not a rigid ranking. 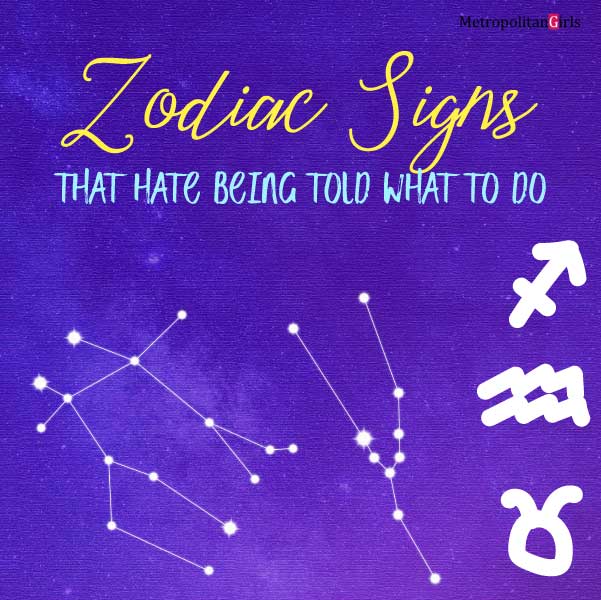 If this sign was your guess, congratulations! The price is nothing — because stubbornness is a classic Taurus trait and you can see it coming from a mile away.

The bull is extremely stubborn and will not do anything that is against their will. They only do what they please and will only listen to anyone else if they see there is a valid reason.

Taureans go one step beyond just hate being told what they can or cannot do. The more nagging they receive, the deeper they dig their heels in and refuse to budge.

Taurus is not a vocal sign. They will just stick to what they want to do. Their motto is ‘my way or the highway’ and ‘silence is golden’.

Geminians are not stubborn in the same way that Taureans are. They are simply too carefree to care for what you think.

The twins do what they want because they feel they can. They will intentionally ignore you if you tell them what to do. Even if it’s for their own good.

Gemini is controlled by their active brains. That means they not only won’t listen to other people, sometimes they won’t even listen to themselves. That’s right. Geminians can be contradicting sometimes.

However, this weakness is also Gemini’s strength. The ability to challenge yourself and change your thoughts quickly is a helpful trait in some situations.

The sign of twins also operates on their moods. If they are in one type of mood they will do something but their moods can change in an instant which means they will end up doing something else while not finishing the first thing they decided to do.

If the Geminian doesn’t follow through on things that they decide to do, then they certainly will not listen to what you tell them to do. Don’t worry — it’s not you — they’re just too busy fighting their own selves.

The sign of the ram shares Taurus’ motto of ‘my way or the highway’ but they won’t dig their heels in the same way Taurus would do — nor would they simply ignore what you say like Gemini. Their reaction could be much worse depending on your own sign and personality.

This is what will happen when you repeatedly ask an Arian to do what they choose not to do: explosion. Ka-pow. That’s right. The firey Arian will flat out throw a tantrum in order to let you know that they hate being told what to do. Unlike the earthy Taurus or the airy Gemini, the fire sign Aries is not afraid to give you a piece of their mind.

Remember that the Aries is a passionate sign and they will express how they feel physically. This does not mean an adult or teenage Arian will literally throw themselves onto the floor kicking and screaming like their young counterparts. But they may yell, throw things, or use hand gestures that will make it clear that they are not going to listen to what you tell them to do!

The men & women of the Aquarius sign are known to be very independent and rebellious. They don’t want to conform, nor do they want to be like anyone else. They do what they want. For this reason, they will only be who they are and will only do what they please.

Aquarians will refuse to listen to you if they don’t think what you’re asking them to do makes sense.

Aquarius won’t necessarily throw a tantrum as the Aries would — after all, it is an air sign (yes, despite having “aqua” in its name, Aquarius is an air sign). Instead, they will find other ways to express their hate for conformity. This often comes in the form of a clear message, be it verbal or written.

Capricorns absolutely hate getting told what they need to do. Not because they are purposely being belligerent as the other signs mentioned, such as Aquarius. They don’t need that extra input because they feel that they have life figured all out. And sometimes they’re right.

The thing about the people who are born under the Capricorn sign is that they are natural planners. They are organized. And they make plans for everything. Often they’d like to stick to the plans that they so meticulously made. When you jump in all of sudden and ask them to do something, you’re a danger to their well-planned life. You’re an anomaly in their plan .

However, they are willing to listen to others if they know they need expert advice on something. They want to be successful in anything that they do. This means they are also humble enough to realize that they are not knowledgeable about everything and will actively seek out advice. That is probably the only exception.

Related: Money & The Zodiac: 5 Signs That Are Good With Money

This fire sign does what they please because they, like the Gemini, are controlled by what their wishes are during the moment. However, they also live for adventures. They will be listening to what others tell them if what they are being told to do is fun and adventurous. In that case, they will not hesitate to say okay and even invite them along.

On a good day, they might choose to just ignore you. But remember, Sagittarius is a fire sign just like Aries. Their silence can only mean that the pressure is building in that Sagittarian pressurized cooker. You will want to tread carefully because when they can’t hold it in, they will go on the offense.

And that wraps up our list of some of the signs that you won’t be able to order around. Now just because you can’t explicitly tell them what they should do, it doesn’t mean that you can’t get them to do what you one.

The trick is to understand each of the signs and their nature. Find out what are their weaknesses. For example, as we’ve discussed above, Taurus is stubborn and the more you repeat the same argument the firmer they take their stance. To get them to do something, you have to make them think that they made that decision themselves. How? By subtly presenting information to them: news, data, etc. Alternatively, you can explain to them why they should really consider doing what you ask them to do. Remember, Taurus is stubborn, they aren’t stupid! Anyway, I hope you get the idea.

Don’t go yet! Check out this article to find out which signs like to read the most — according to Astrology.