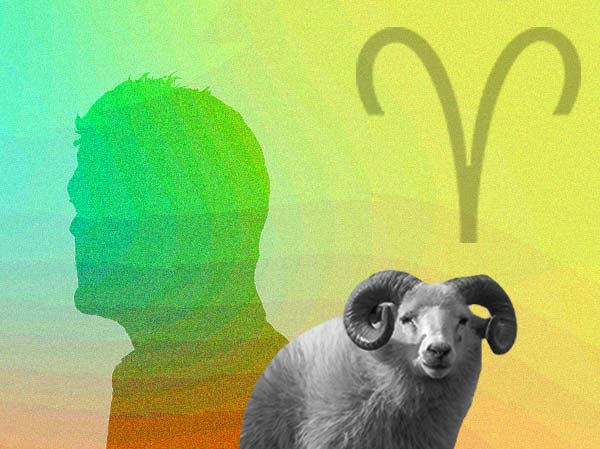 Aries men are the embodiment of the alpha male stereotype. Born under the first cardinal fire sign, these men are born natural leaders and pioneers. They live for the frontline of whatever passion they choose to pursue – as long as they can stay interested – patience is not Aries’s strongest point. Below are some quotes about Aries men, also check out these quotes about Aries women that is part of our Aries quotes collection.

Underneath that bombastic bravado, a childlike naiveté can cause an Aries man to end up with hurt feelings that are often masked by humor.

With driven, passionate, and courageous personalities, Aries men are movers and shakers who make big things happen in their careers and communities. 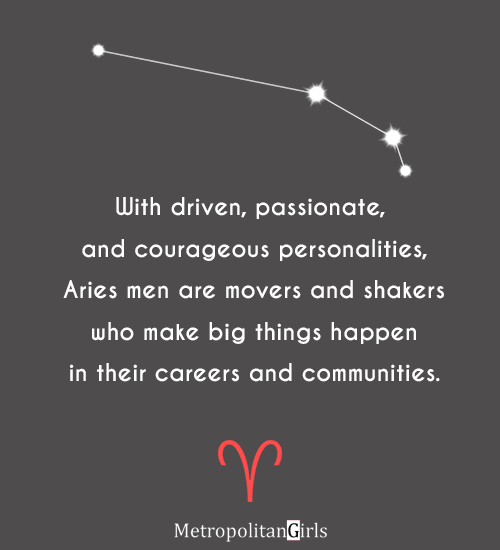 Aries man is attractive, strong, and confident, always ready for something new and exciting. He doesn’t lack initiative or character and it is a fun competition to win his heart.

Aries men can be easily bored and require constant stimulation.

As a dad, the Aries man is excellent at making little ones explode into fits of helpless giggling and happy to unleash his inner clown to delight children of all ages.

The Aries man is the kind of father who may toss his babe high up in the air before catching them again, or toss them in the pool to teach them to swim – much to the chagrin of their possibly more safety-conscious and risk-averse co-parent.

Aries men are mischievous but not devious, sometimes foolhardy but never fools, egotistic but not selfish, seriously sexy, and extremely fun to be around. 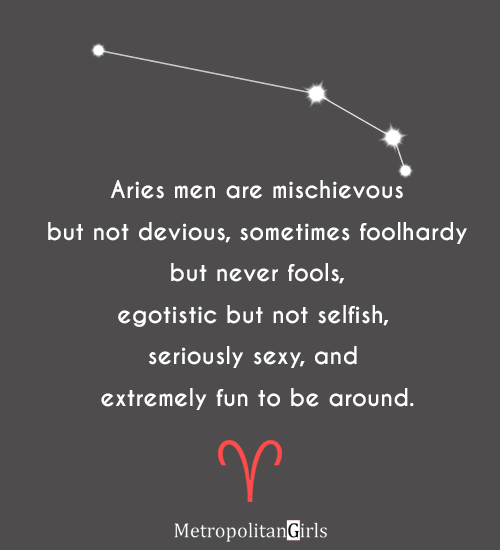 An Aries man lives for adrenaline, change, excitement, and novelty – so if you want to give him gifts, choose skydiving lessons, martial arts classes, or an exciting surprise vacation to somewhere he’s never been before.

The Aries man wants a powerful match that he can respect, and doesn’t have a lot of time for passivity, mixed messages, or doublespeak – but once he’s decided he wants you, he’ll put up with a lot if he thinks he can attain the prize.

Stubborn as the Ram that symbolically represents him, the typical Aries man is a warrior for what he believes to be right and true.

Aries plays by his own rules. He doesn’t care how convention says he should behave, and that definitely includes his love life.

The best way to turn on an Aries is to just completely ignore them – but beware! That kind of rebuff won’t often get you a second chance. Another way to get Aries’s attention is to get them a little gift.

The Aries man is a natural trailblazer and is interested in all things new, which lends him his intrinsic childlike curiosity and creativity. 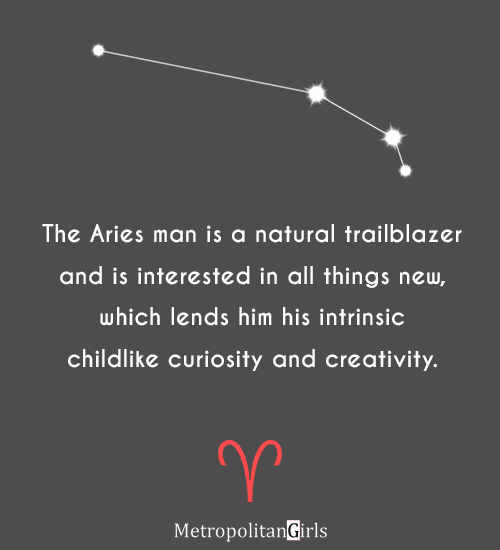 Aries is the sign of the fiery, rebellious personality, so be prepared to expect the unexpected with them – in their interests, personal perspectives, and even in their occasionally flamboyant dress sense.

The first cardinal fire sign is not the sign of a homebody, so don’t expect the living space of the Aries man to be welcoming or comfortable.

An Aries man knows what he wants immediately, and goes after it with zero hesitation. 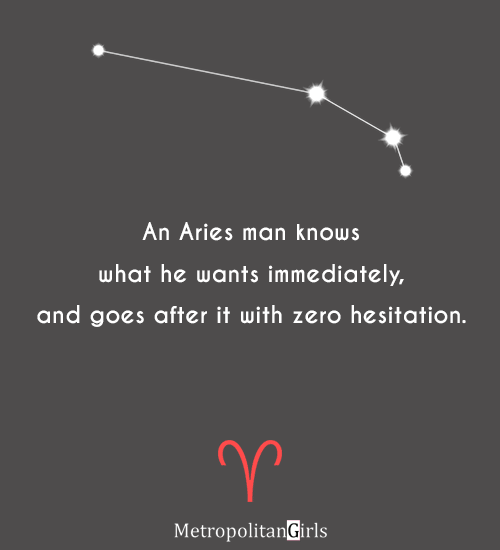 The Aries man is one that makes you breakfast in bed, sends an enormous bouquet of flowers to your job, and gives you handwritten love notes on a whim.

Aries’ motto is “go big or go home,” so when he wants to do something for you, it’s monumental.

With impulsive and idealistic traits, Aries tend to dream big, which means that they can be enterprising entrepreneurs.

Aries defaults to a bright-eyed and bushy-tailed demeanor, ready for adventure at any given moment.

When an Aries man falls in love, one way or another, you will know.

When an Aries man is in love, he becomes single-minded.

Aries can be jealous, and though he will try his best not to show it, he is not good at hiding his feelings. 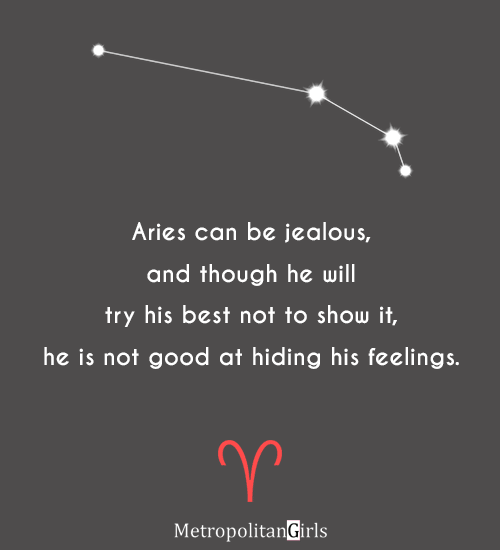 If an Aries commits to marriage, it will take something drastic to make him stray.

Aries wants a playmate more than a soulmate; someone who can meet and match his energy and enthusiasm, and who won’t hesitate to yell at him to stop when he gets carried away.

The Aries man is hot, hot, hot – physically and emotionally.

When you’re feeling down, Aries is like an extra shot of espresso that perks you up. 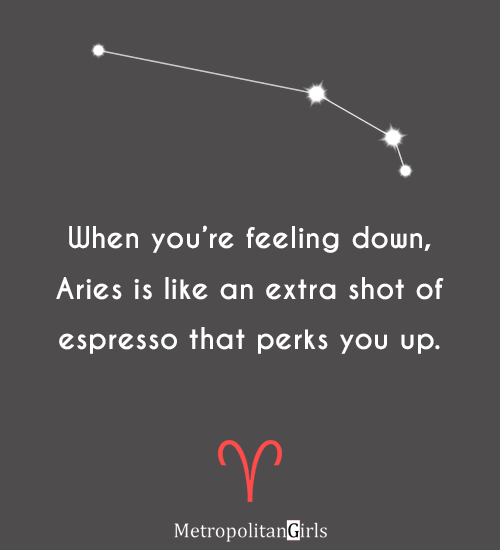 As anyone who has ever met an Aries can attest, Aries is always number one.

An adventurous and exciting lover, Aries men are never dull or boring.

Whether it’s in business, war, or love, Aries is always up to the challenge.

When you’re with an Aries, it’s like being with a true best friend all the time.

Remember that just because you hit bottom doesn’t mean you have to stay there – Robert Downey Jr. (April 4, 1965) 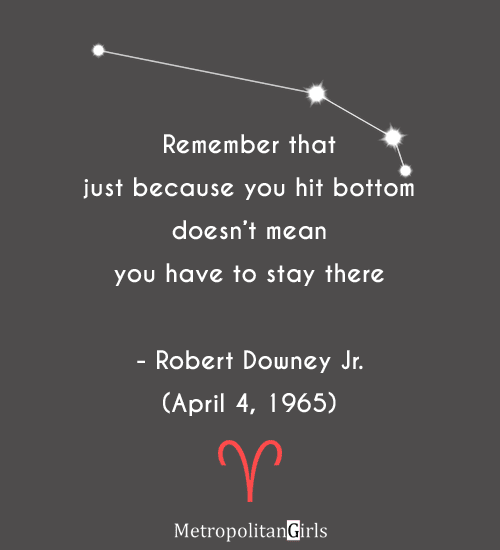 But a mermaid has no tears, and therefore she suffers so much more. -Hans Christian Andersen (April 2, 1805), The Little Mermaid

Sometimes the truth don’t rhyme, sometime the lies get millions of views. – Chance the Rapper (April 16, 1993) 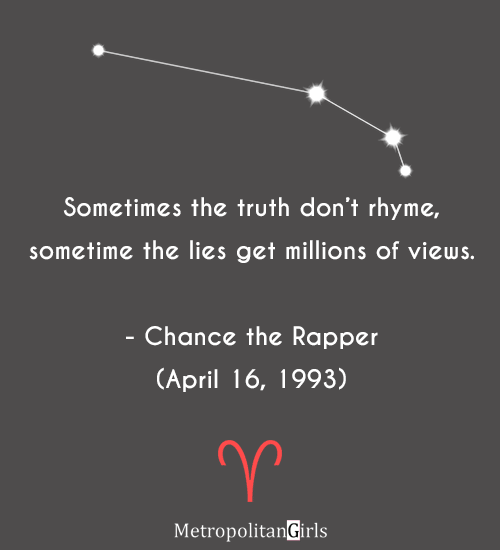 All men are sculptors, constantly chipping away the unwanted parts of their lives, trying to create their idea of their masterpiece. – Eddie Murphy (April 3, 1961)

Don’t wait for the stars to align, reach up and rearrange them the way you want… create your own constellation – Pharrell Williams (April 5, 1973)

They’ve done studies, you know. 60% of the time, it works every time. – Paul Rudd (April 6, 1969) as Brian Fantana in Anchorman: The Legend of Ron Burgundy 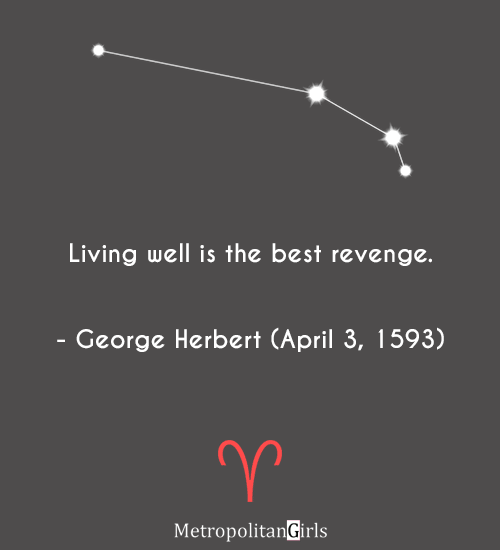 I don’t believe in elitism. I don’t think the audience is this dumb person lower than me. I am the audience. – Quentin Tarantino (March 27, 1963)