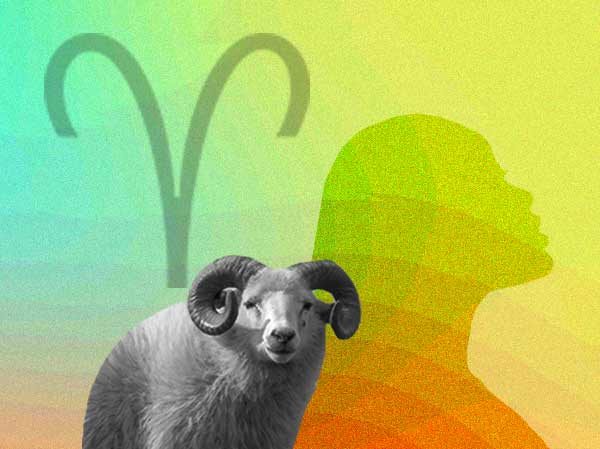 Aries women are passionate, energetic, and independent. Born under the cardinal fire sign Aries, these women are straightforward and the no-BS type. These traits may make them appear rough around the edges but they aren’t the kind that backstabs. Arians are also natural leaders in all areas of their lives: work, family, study, etc. Below are some quotes dedicated to the Aries women, also check out these quotes about Aries man that is part of our Aries quote collection.

The key to understanding the Aries woman is realizing that she needs lots of tinder and solid wood to keep her spark burning.

Aries is a natural leader and can inspire and motivate those with whom she works.

An Aries woman is not a person that “talks a good game”, she actually “walks the walk.”

Aries women are not afraid to be silly and aren’t shy about being the center of attention.

Aries women dislike restrictions of any kind, a possessive relationship will end up going nowhere.

An Aries woman will speak her mind, you don’t have to ask twice for her honest opinion. 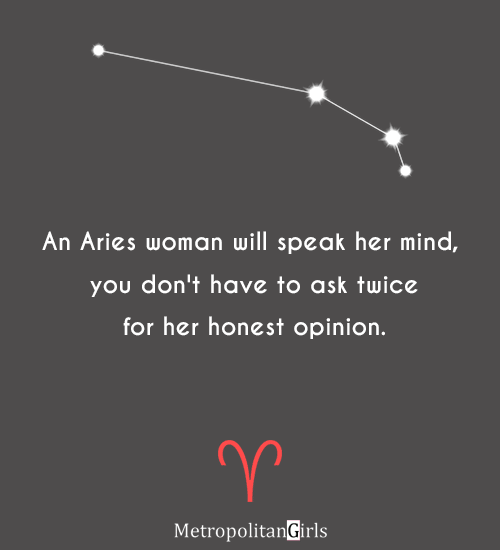 The Aries woman is a bit of a loner who usually has just a couple close friends who are as physical and spontaneous as she is and can be ready on a moment’s notice to join in on her adventures.

Aries is a sign that always wants to move forward. When the past catches up with them, they are not sure how to handle it.

Not only are they super courageous, outgoing, and willing to make a friend out of anyone, Aries women are some of the most passionately honest people ever.

The Aries woman projects a sense of radiant confidence and seems to glow with an inner light.

Aries woman is always out and about enjoying a multitude of different activities.

The Aries woman never needed liberating – she was always free as a bird and well able to run her own life. 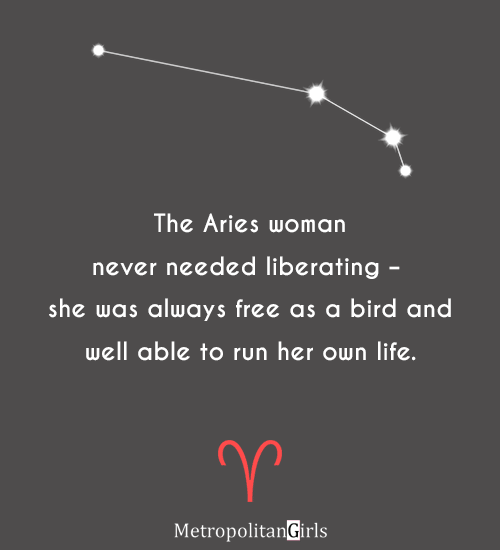 As strong-willed as they may appear on the surface, Aries women’s feelings do get hurt, mostly because they don’t give themselves enough time to think before acting.

Because the Aries woman instinctively believes that good looks come from within, and watches her diet and exercises regularly, she is naturally attractive.

As strong as she is, Aries women can be equally vulnerable in an almost childlike manner.

Friendships with the Aries woman are often brilliantly intense, yet can also be fleeting, although she does keep select close friendships that last.

Never lacking in optimism, the Aries woman is frequently seen as a crusader for the rights of others and a defender of lost causes.

The Aries woman is always on the move with her projects, ambitions, and rampant creativity.

The Aries woman doesn’t like fuss, so her hair is sleek and simple, and can be styled up for grand occasions, or just left to its own devices when she is pursuing a goal.

The Aries woman’s zest for life is limitless, her quest for fun never-ending. 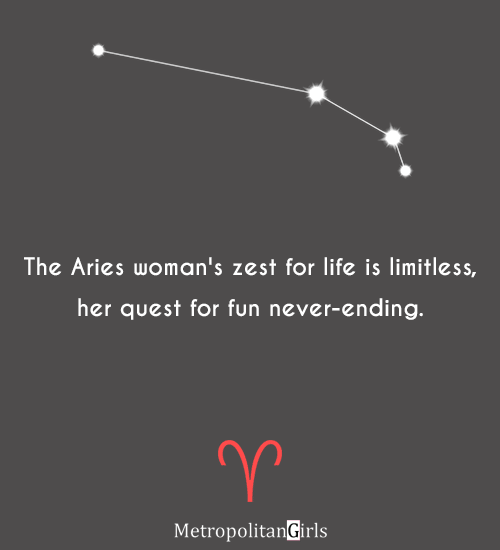 Aries ladies have their own way of seeing the world: They often call it like it is, eagerly pointing out when the emperor is wearing no clothes.

Arian women don’t need a big entourage on her nights out, just a few like-minded people up for anything will do.

Ruled by the Ram, this ambitious lady thrives on challenges, but her impatient nature may have her moving to the next undertaking before the previous one is finished.

Whether it’s a friendship, romantic, or professional relationship, equality is essential to an Aries woman.

A fearless and natural leader, an Aries woman is charismatic, energetic, and dynamic.

Aries can talk politics with intelligence, business like a boss, and still remember the way you like your coffee.

Success is important to the Aries woman, but if she fails, you’ll generally see her spring back up and move quickly on to the next new thing without much discouragement.

The Aries woman always at the front of the queue and kick-starting everything from projects to dinner dates. 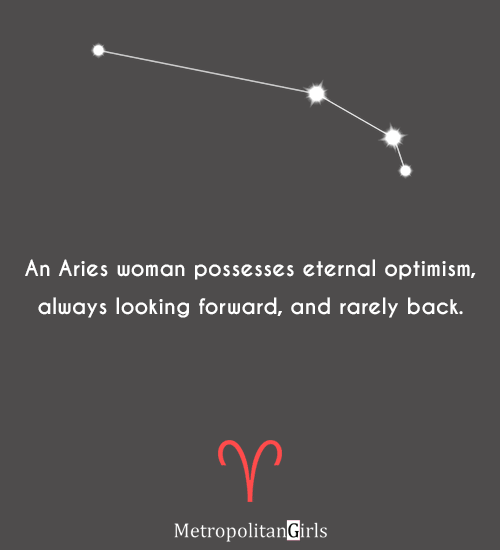 Whatever you do, don’t pretend to agree if it’s not how you really feel. An Aries woman would rather argue over an issue for weeks and have it resolved than revisit it again and again.

An Aries woman is a confident, free-spirited, and fearless woman who sees life as a challenge will tackle anything or anyone head-on, and won’t tolerate personal failure.

Aries women are natural super-achievers. It often doesn’t take much exertion for them to accomplish a good deal of success.

The Aries woman is quick to anger but also quick to let her anger go.

Fun, free-spirited, and fiercely independent, the Aries woman is a breath of fresh air – a brightly burning candle in human form.

Influenced by the fire element, spontaneity is infused into an Aries woman’s persona.

Whatever the Aries woman does, it will be with her whole heart and soul. 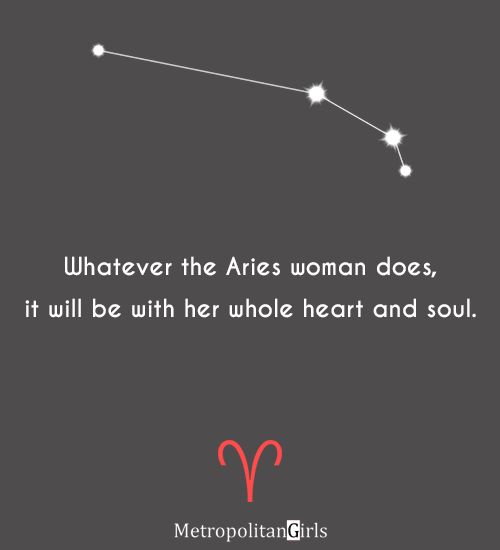 If a new challenge arises, you tackle it full steam ahead.

The world Aries women live in is in constant motion.

The Aries woman does not tolerate failure.

Arians are simply too busy to be sick.

An Aries woman is a standout who wants to make a statement.

Adventure and excitement are what incite passion in an Aries woman.

Aries woman insists on having complete freedom throughout life.

“Let’s get started!” is an Aries woman’s battle cry.

Eager and enthusiastic, the Aries woman is the alpha female of the pack,

An Aries woman would rather give orders than take them.

Aries woman loves high romance and the grand gesture, but also all the little caring ones in between. 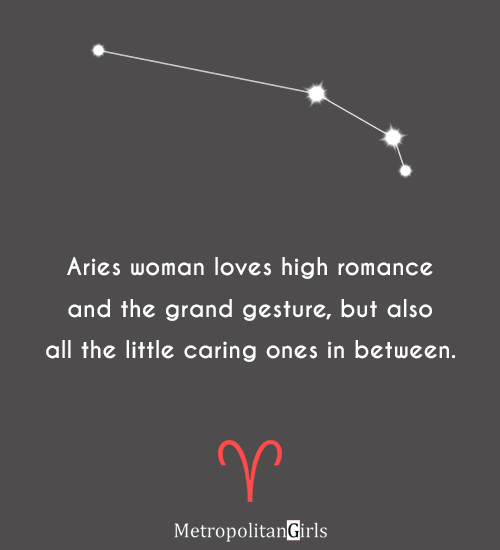 An Aries woman a passionate and generous lover.

Aries lovers have an inherent instinct to renew and reinvigorate their relationships, and being with one can help other signs learn to stoke the fires as well.

An Aries female is often the seducer in the game of love, but her partner and lover has to be strong and a match for her own personality or she will lose interest.

An adventurous and exciting lover, Aries women are never dull or boring.

The chase, the hunt, that heart-thumping adrenaline rush from claiming her prize – these are the things that Aries women love.

Aries women need a lover who can stimulate them and can be fiercely loyal lovers.

An Aries mother is playful and fun. She’ll encourage her kids to try new things and will take them with her wherever she goes, in the name of experience.

The Aries mom will instill her children with confidence, encourage their independence, build their confidence, and inspire them to be the best they can be. 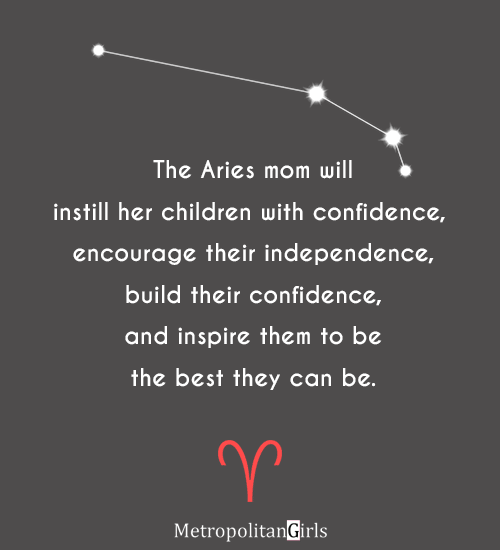 As a mother, she’s caring and not fussy. She will fight tooth and nail for her children and is keen for them to do well.

An Aries household is usually full of light and laughter with good music always playing.

The Aries mother is playful and fun, and will often be seen with a baby strapped onto her back or in a bicycle trailer – as she believes it’s never too young to start going on adventures. 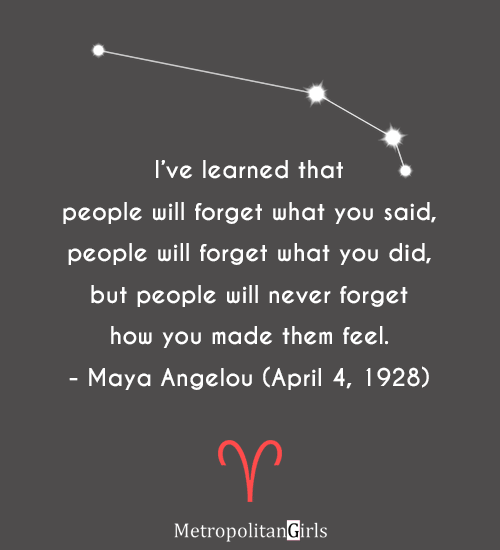 Don’t let anyone tell you what you can and can’t do or achieve. Do what you want to do and be who you want to be. Just encourage and include each other, don’t ostracize the gender in front of you. – Emma Watson (April 15, 1990)

Follow your instincts and do not let other people’s opinion of you become your opinion of yourself. – Sarah Jessica Parker (March 25, 1965)

Never, never listen to anybody that tries to discourage you. – Mariah Carey (March 27, 1970)

We all require and want respect, man or woman, black or white. It’s our basic human right. – Aretha Franklin (March 25, 1942) 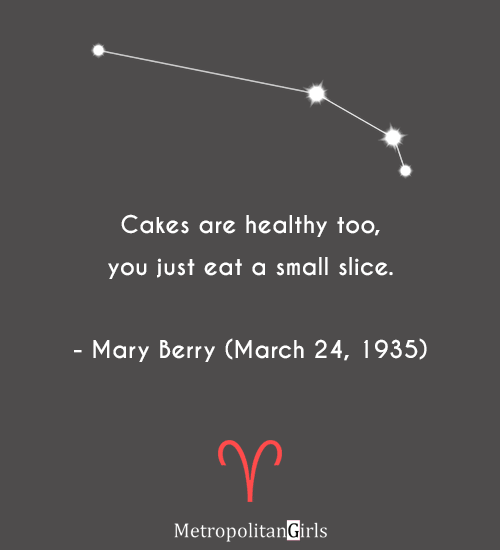 The search for human freedom can never be complete without freedom for women. – Betty Ford (April 8, 1918)

People who understand grammar always have a keen sense of the ridiculous. – Mary Jane Holmes (April 5, 1825)

The trouble with education is that we always read everything when we’re too young to know what it means. And the trouble with life is that we’re always too busy to reread it later. – Margaret Ayer Barnes (8 April 1886)