Discover facts you didn’t know about Helen Keller: 10 facts that will help you get to know this famous 20th-century humanitarian better. Helen Keller was an inspiring figure. Imagine how it is possible for one to achieve a degree in Bachelor of Arts when one is deaf and blind? That alone makes her achievements outstanding. Below are 10 interesting Helen Keller facts that will motivate you. 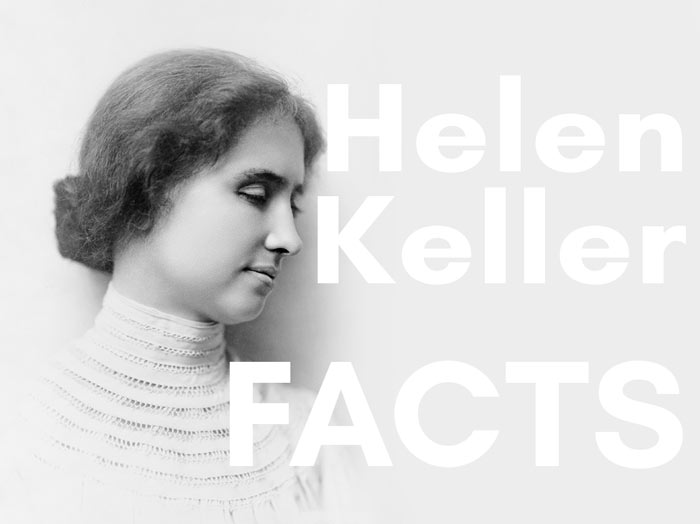 Fact 1. Helen Keller learned how to speak when she was only six months old.

Sure, there might be a lot of other babies who can speak some words at six months old. But what makes Helen different from other infants then was that she was born deaf-blind. Usually, babies who are born with difficulties in hearing don’t learn how to speak until later in their life. It’s because for a child to be able to produce sounds on his own, he should first listen to the sounds around him. But that wasn’t the case with Helen. She was, indeed, a gifted person in the truest sense.

As kids, neither Martha and Helen had any formal training in sign language. What they have developed between them was the result of a connection and strong bond that no one could ever break. To be able to communicate without words as children isn’t a normal thing to do. Much was applauded for the two young girls. Martha and Helen had developed over sixty signs by the time Helen was seven years old.

You’ve probably heard of Mark Twain and his great works. Apparently, Helen and Mark’s friendship goes a long way back. It was in 1896 when Helen was attending the Cambridge School for Young Ladies when she met the legendary American writer. Helen wrote in one of her writings that Mark did not treat her like any other freak, but she was treated as a disabled woman who was trying hard to live normally. Helen also became close to Twain’s daughter who, at that time, was the same age as Helen’s. Helen was able to recognize Mark Twain by his scent as he often smoked tobacco.

Fact 4. Helen Keller was an acquaintance of Alexander Graham Bell.

You might know Alexander Graham Bell for inventing the telephone. But this wasn’t how Helen got to know him. When she was six, her parents brought her to a physician who suggested for the family to see Bell. The physician suggested them to visit the Bells because Alexander’s wife was also deaf. Mrs. Bell’s situation prompted the inventor to establish a school for the deaf in the name of his wife. Helen was eventually enrolled to the Perkins Institution for the Blind, which was an institution suggested by Bell himself.

A significant part of Helen’s childhood schooling is Anne Sullivan. She was the one who patiently taught Helen how to communicate. Sullivan was also a good friend of Mark Twain and the author even called her a “miracle worker” for her works with Helen.

At 36 years old, she had a new secretary, Peter Fagan. The twenty-something lad developed a professional working bond with Helen and quite a bit more. Both Helen and Peter fell in love with each other. They got engaged and was ready to tie the knot. Unfortunately, Helen’s family wasn’t in favor of the marriage due to her disabilities. She never got the chance to marry. She had reportedly marked that, “If I could see, I would marry first of all.”

Fact 7. Helen Keller’s image (with braille) is on the Alabama state commemorative quarter.

Helen Keller’s legacy will never be forgotten. The Alabama state government honored her humanitarian works by issuing a commemorative quarter in her name. On the coin, Helen Keller is depicted as a woman who’s sitting on a rocking chair while holding a book. On the coin is her name written in braille.

Fact 8. Helen Keller had traveled to 39 countries to serve as an advocate for the disabled.

Helen might be born deaf-blind, but this didn’t stop her from traveling the world. This goes to show that once you have your goal set, nothing else can stop you. She traveled to 39 countries to give lectures at medical schools, to visit schools and treatment facilities for the disabled, and to meet with organizations who organized institutions to help with the blind. Indeed, she didn’t let her disabilities get in the way. Instead, she used it to inspire millions of people all over the world.

Fact 9. Helen Keller was the first person to own the Akita dog to the United States.

In one of her visits to Japan, a Japanese police officer gave Helen his dog. It was an Akita dog and the dog breed hadn’t existed yet exist in the United States. Helen absolutely fell in love with the Akita dog that after the dog’s death, the Japanese government presented Helen a dog of the same breed.

Helen’s disabilities didn’t stop her from fighting for what she believed in. The world knew her as a dedicated activist and humanitarian. Her goal was to create a better world, and that’s precisely what she did. She visited hospitals and schools in different countries around the globe. Although she was deaf and blind, she made sure her voice was heard loudly through her writings.

Did you find a Helen Keller fact that has inspired You?

Which of the facts about Keller above inspire you the most? Did you know any other interesting facts?

Helen Keller was an inspiring human being. She was able to achieve great heights despite hardship and challenges. Today, we know Helen Keller as a strong woman who rose above her disabilities. Although she was born physically-challenged, she did not give up on herself. There is a huge part of a Helen Keller in all of us – women that are challenged and may have encountered a lot of hardships in life but will not give up on trying.