Ice cream is one of the most popular desserts. They are cold, sweet, and immensely satisfying. In this article, you will find some facts you may find interesting about this delicious dessert. Whether it’s the hot or cold season, no one ever says no to ice cream! 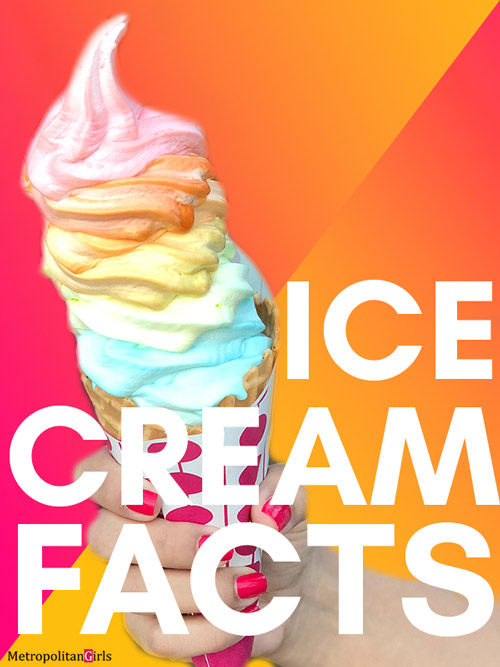 We think it’s even more fitting in cold nights when you just want to stay in while ugly-crying over a movie. Ice cream is really the best choice when you’re craving for something sweet. Try all the chocolates and candies you want, but nothing beats the sweetness and coldness of the ice cream. Below are some interesting facts about ice cream.

Fact 1. It takes about 50 licks to finish one scoop of ice cream.

This may depend on the type of ice cream or the temperature of the surroundings. But at room temperature during a normal day, it would take someone 50 licks on average before he finishes one scoop of ice cream. Where and when does this fact become useful? Hey! We said these facts were going to be interesting, nobody said anything about them being useful! Anyway, this data is perhaps useful when you just want to grab a quick run for some ice cream but you would really need to finish it as soon as possible. Just lick your ice cream quickly fifty times and you’re good to go. This is subject to trials, of course. Go ahead and try it out!

If you come to think of it, vanilla ice cream looks plainer than the chocolate variant. Also vanilla ice cream is pretty much the default, base ice cream of the 21st century. But did you know that the fact that chocolate ice cream was invented before vanilla ice cream? There was a point in history when vanilla was actually considered as a rare flavor. Interesting things happen as we travel back in time.

Fact 3. Ice cream was once considered a status symbol.

Nowadays you’d find Starbucks fans with a venti coffee in one hand and the latest iPhone in the other. Or maybe they’re on a private plane traveling to the Maldives. That’s this generation’s way of saying that they are a part of the elite group. But can you imagine ice cream as a symbol of wealth? Believe it or not but back in the 1700s, people in America regarded ice cream more of a privilege that comes with wealth than just a simple craving. And this fact makes sense because at that time only the elite gets to enjoy this sweet treat since it was so rare in America back then. Think of all the fun we’d be missing if ice cream is too expensive for the general public.

Fact 4. The most popular ice cream flavor is vanilla.

Are you a chocolate flavor lover? Or maybe a strawberry ice cream enthusiast? Well, you have your own favorites, but the world has spoken, and vanilla won in the popularity department! We’re guessing that this is because it’s not too sweet as chocolate or strawberry. It’s just sweet enough to be considered as a dessert. Also, if you compare it with other ice cream flavors, you can definitely say that it’s the most neutral one and can cater to every person’s taste.

Fact 5. 90% of Americans have an ice cream tub in their refrigerators right now.

Fun fact: most Americans store at least a tub of ice cream in their fridges. This fact is a no-brainer, really! Ice cream is like a staple food in America more than anything else.

Fact 6. With that, the top three countries who consume ice cream the most are…

America takes the first place of course! Followed by Australia then Norway. It’s no surprise that America loves ice cream. And it’s understandable that Australians came in second because it can get absolutely hot there during summer. For Norway, we’re guessing they are a bunch of sweet teeth?

Fact 7. No one knows who invented ice cream.

While the world knows that Albert Einstein came up with the General Theory of Relativity (which eventually leads to the discovery of the black holes) and Alexander Fleming invented penicillin, no one really knows for sure who to thank for inventing ice cream. The earliest records of this sweet treat go a long way back during the time of Emperor Nero. It was said that he loved mixing honey and fruit with snow. If this was true, at least the infamous Emperor Nero made some contribution to human progress. Interesting fact: Nero is considered one of the worst Roman Emperors.

Fact 8. Sundaes were actually named “sundaes” for a reason.

You’ve probably heard of the joke “why eat a sundae on a Monday?” or something close to that pun. But did you know that it was, in fact, named like that as a pun? There are two stories related to this, but the most popular and perhaps the most interesting story featured Edward Berners. Berners owned Ed Berners’ Ice Cream Parlor, and it was during those times where Sunday was indeed kept holy as a Sabbath day. During this day, ice cream sodas were prohibited by religious laws to be sold during Sunday as they weren’t allowed to indulge in anything sweet. However, Berners got around this idea and used the technicalities to ditch losing customers who would want to buy ice cream sodas during Sundays. He got away with it by serving an ice cream soda without the soda. So basically, it’s just ice cream and syrup. Initially, he only sold these during Sundays, but it was so heavily requested and raved by his customers that he started selling it every day! Although Berners got away with it, he decided to change the spelling so that it wouldn’t be entirely associated with the Sabbath day.

If you’re wondering what makes your favorite ice cream so delicious and addicting, you don’t actually have to search too far to know the secret ingredient. It’s actually air. So the next time you feel like your ice cream is way too light, don’t head over to the cash register to complain! The sellers don’t have to do anything with it. Ice cream is actually formulated to be this way. Air is what gives this dessert its light texture.

What is your favorite ice cream fact?

Now you know more about ice cream than just a sweet treat or something that could satisfy your monthly cravings. Also, can we take a short moment to appreciate how ice cream has evolved throughout the years? From not knowing who its inventor was to when it was considered to be a luxury to getting a sundae ice cream and now, to have become one of the most accessible and most popular desserts. Ice cream really did flourish and it deserves its popularity. Everybody just loves ice cream!

And those were our favorite ice cream facts. What about you? Do you know a fun fact about ice cream that is not found in the list above?

How Ice Cream Is Made