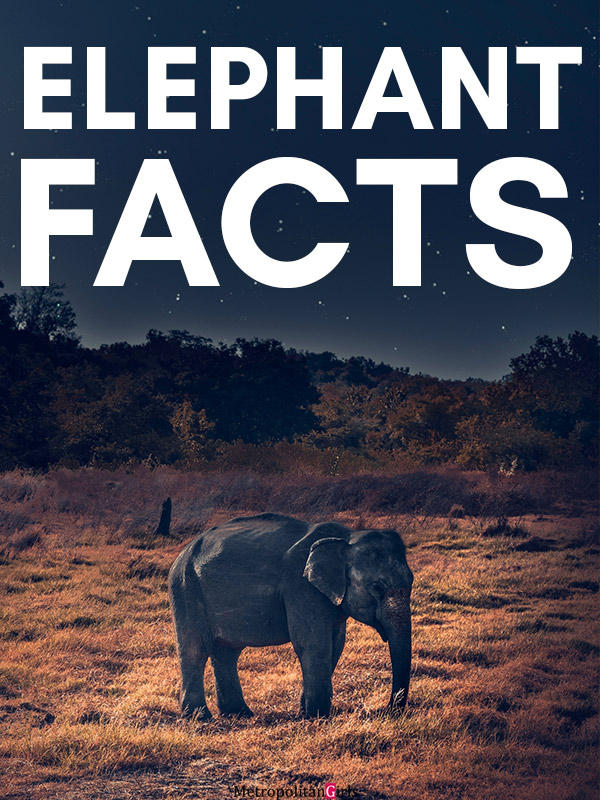 Elephants are majestic creatures veiled in mystery. Find out more about these gentle giants in this article. Discover elephant facts you don’t learn by watching Dumbo.

Elephants have always kept this sense of elegance and mystery in them. Maybe it’s because of their towering height and large build. Or maybe because these are not the kind of animals that you get to see every day and that’s what piques your interest about these majestic creatures.

Here are some facts about elephants that will help satisfy your curiosity about them.

Elephant Fact 1. They are the world’s largest animals.

This elephant fact is one of the many reasons why elephants are known all over the world. At their towering height of 2.7 meters and an average weight of about 3,000 to 6,000 kilograms, you’d think that people would fear this giant creature. But that’s not necessarily the case. Although they are tall and could probably squish a human being in just one step, you would be surprised that these animals are also one of the friendliest species on Earth.

Elephant Fact 2. There are three different species of elephants

The three different species of elephants are the African Savannah elephant, African Forest elephant, and the Asian elephant. Although they almost look like the same with their great sizes, large ears, and ivory tusks, there are still some considerable differences. Interesting elephant fact: African elephants have ears that are shaped like the continent of Africa while Asian elephants are shaped like the country of India, which as you’re aware of, is part of Asia. That’s so cool, right?

Elephant Fact 3. You can tell how old an elephant is by their tusks.

With humans, it’s so easy to know their age. You can judge it by the elasticity of their skin, or you ask them directly. However, that’s not usually the case with elephants. You cannot simply ask them (well, duh) or base it from the texture of their skin. You can judge an elephant’s age base on his tusks. One thing you should know about it is that their tusks never stop growing. For African elephants, both the male and female elephants grow their tusks.

On the other hand, for the Asian variety, only the male elephants grow theirs. The longer the tusk, the older an elephant is. So if you happen to see an elephant that doesn’t have a tusk, then it’s probably a female Asian elephant!

Elephant Fact 4. They spend half of the day eating.

With their large, towering size, it’s no surprise that they spend almost 12 to 18 hours eating. Yup, that’s nearly half a day. Well, they do have to put on much food to gain their average weight of about 6,000 kilograms. What’s fascinating is that they smell the food with their trunks and get it by the trunk, too.

Elephant Fact 5. Elephants can mine salt.

This fact may come off as quite a shock. Most of us know that table salt comes from seawater. A process called desalination separates salt from seawater. But did you know that salt can be mined in caves? And that a certain group of elephants is also capable of mining salt for their own consumption? The African elephants in Mount Elgon National Park, Kenya, use their tusks to break apart cave walls which contains a high level of salt. They would then chew and swallow the cave wall pieces.

Elephant Fact 6. Elephants have their own sunscreen.

Elephants have an ingenious way to protect themselves from the harshness of the sun’s ultraviolet rays. How? By using some sunscreen, of course. Just like humans, elephants use sunscreen as protection against UV lights. But you won’t be seeing an elephant buying a bottle of sunscreen at the local store because their sunscreen is not what you think. After they’re done in taking a bath in the swamp, they’ll immediately throw in some mud and sand all over their body to have it covered. That’s the elephant’s version of sunscreen. Who needs bottles of sunscreen when you can cover yourself with sand and mud?

Elephant Fact 7. Their skin is the most sensitive part of their body.

Speaking of an elephant’s skin, it’s probably the most sensitive part of their body. The elephant’s skin is about an inch thick; underneath it is is a bunch of nerve endings which accounts for their sensitivity. The sensitive skin also helps provide an additional way for them to communicate with each other — by simply tapping on each other.

You probably know by now that elephants make loud trumpet noise. But did you know that they also purr? If you think that felines (related: Interesting Facts about Cats) are the only living creature that’s capable of purring or emitting sound vibrations through their vocal cords, then you’d be surprised to find out that elephants can do this too! Can you imagine how comforting it is to touch an elephant’s trunk and feel it purr? We’d surely want to experience that! Watch this video to see them purr (about six seconds into the video).

Some animals don’t care much about their offspring, this isn’t the case with elephants. Once an adult elephant hears her baby’s cry, she would immediately go to her child and try to comfort him. However, not only that the mother elephant does this, but the whole family of the elephant would try to comfort the baby elephant. Who doesn’t love to see enormous elephants comforting a baby elephant?

A Sad Fact: Elephants As A Species Are Dying…

These are just some of the elephant facts that we find interesting. Not only are elephants good-natured, but they are also one of the sweetest and most sensitive animals. We have elephants to look out and care for. Unfortunately, they are an endangered species. We must find ways to help save their dying breed. We wouldn’t want to just remember elephants in pictures and writings, wouldn’t we?

Having said that, what is your favorite fact about elephants? Do you have an interesting elephant fact to share with us?
Other fun facts to check out