One of the most commonly known facts about the cheetah is that it is the fastest land animal in the world. But that isn’t the only interesting story that makes this apex predator stand out from the rest of the animals. Here are 9 facts for cheetah fans to learn more about this interesting feline creature. 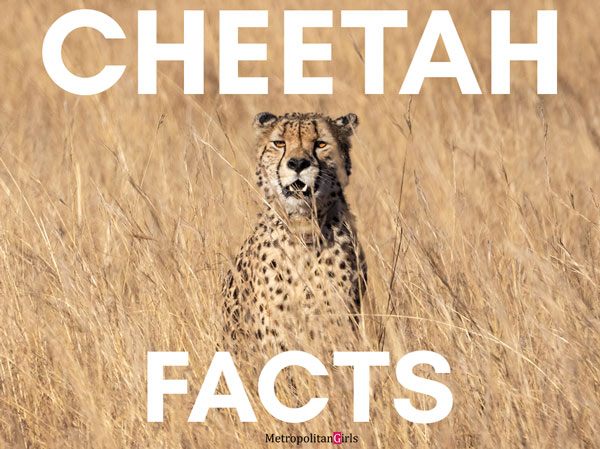 In addition to long legs, the cheetah also has an elongated spine and semi-retractable claws that provide a strong grip on the ground. The claws’ grip allows the cheetah to maneuver itself with ease when running at a high speed. Its long tail also has a crucial function of helping the big cat to stay in balance. All these physical factors help the cheetah to glide and prance easily.

Fact 2. Cheetahs are not the king of the jungle, but they sure act like one.

Lions are the king of the jungle acknowledged by humankind. However, lions aren’t the only predator other animals are afraid of. Cheetahs are apex predators that are just as deadly as lions and they are also faster than lions. In fact, they are the fastest land animal on Earth. Some of the animals that the cheetah hunt for food are rabbits, gazelles, birds, rabbits, and warthogs.

Cheetahs are known to be social animals as a fact. They stick together as a group. No one leaves the pack behind. You can think of it as a group of friends sticking together all the time. Usually, baby cheetahs stay with their mothers. When a baby cheetah grows up, it will live together with its siblings for about six months after leaving their mother behind. The male cheetahs stay together and are always on the hunt for food. Female cheetahs also stay together until the mating season comes. There’s not really much of diversity when it comes to the gender of the group. However, this is how their social system works, and it proves to be efficient for them.

Fact 4. Female cheetahs (a she-cheetah) give birth between two to eight cubs at one single time.

Fact: female cheetahs give birth not only to one baby cheetah at a time. They can deliver up to eight cubs in a single pregnancy. The cubs stay with their mother cheetah until they are about 16 to 24 months old. This is the age when the cubs finally separate from their mother and live with their siblings before officially joining another group of their own.

Fact 5. Cheetahs hunt during the day.

One would expect that cheetahs hunt at night, but that is not the case. These apex predators are strong and fast, they can hunt during daytime with a high success rate. Also, they do this strategically to avoid competition with other predators such as lions, leopards, and hyenas. Cheetahs are advantageous because of their exceptional eyesight. Cheetahs can quickly scan their surroundings to look for prey and other competing predators. When they’re on the hunt, Cheetahs would quietly stalk their prey and wait for the perfect time to go in for the kill. When they find the perfect opportunity, they go in for the kill which often ends in mere seconds.

6. Mother cheetahs teach their cubs how to hunt

When it comes to mother cheetahs, they offer their cubs tough love. They don’t spoon-feed their children by just serving them food. Mother cheetahs teach their cubs how to hunt. They don’t target dead animals — no, those can be infected with bacterias and diseases. Instead, a mother cheetah would look for a living prey and catch it herself before handing it to her baby cubs for them to chase after. What the mother does is that she secures the victim first and let her children catch and kill it themselves. Pretty gruesome work to feed your child, right?

The cheetah cubs’ look isn’t just because of their cool look. In fact, it has something to do with their adaptability to their surroundings and increase their chances of not to be found by other predators. Their long, gray and fluffy hair give them not only looks cute on them, but it’s also a way of them having a camouflage. Their furs actually look like a formidable honey badger.

Now, this fact maybe something new to you. But yes, there came a time when cheetahs were trained by humans for hunting. In fact, they go a long way back during 3000 B.C when the Sumerians used cheetahs to help them to hunt. Aside from that, a famous Emperor in India, Mughal Emperor Akbar, trained over a thousand cheetahs in his whole life. He trained the cheetahs to help him when he’s out hunting.

Now, it’s hard to imagine that humans and cheetahs once had a certain connection with each other. Believe it or not, humans did not only use cheetahs for hunting, but it was thought that Tutankhamen’s tomb had some cheetah artifacts. During the Egyptian period, when one passed away, all necessary things were also put into his tome along with symbols and objects that were considered sacred. A member of the cat family, the cheetah may have been considered as a sacred animal for ancient Egyptians.

What Is Your Favorite Cheetah Fact?

Which of the fun cheetah facts above is your favorite? Did you know an interesting fact that isn’t found in the list above?

Cheetahs are fascinating animals to look at and learn about. Unfortunately, like elephants and other wild animals susceptible to poaching, cheetahs are also decreasing in their number at an alarming rate.