Tarot cards are an excellent way to gain insight into someone’s life or personality. In this Astrology-Tarot crossover article, you’ll find five tarot cards that share the closest alignment with Aries the star sign of the Ram. 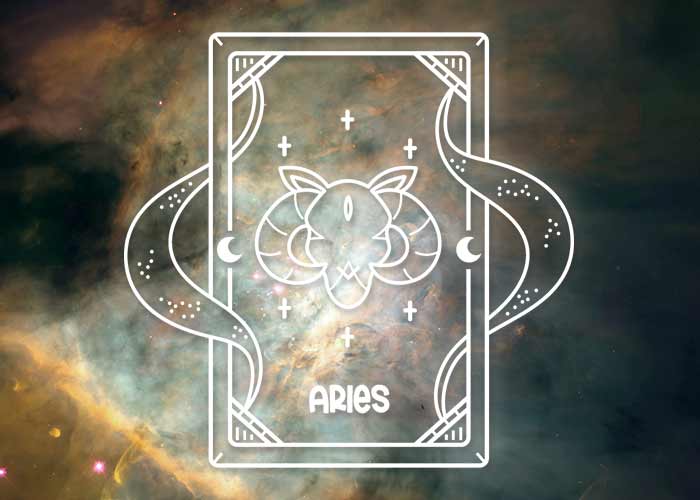 Aries (March 21 – April 19) is the first sign of the zodiac. It is the leader of the zodiac in position and self-proclaimed team captain of Team Zodiac–though the latter remains controversial.

Aries is the cardinal fire sign and it is ruled by the planet Mars. Its official symbol is the typical Ram, though a more apt symbol should be a Ram with flame horns. This isn’t all jokes, as Aries is famous for being a passionate and self-motivated star sign. This is a key theme for the stereotypical Aries, they burn bright and fast. They’re the go-getters and get-it-doners in life.

So what cards from the 78-card Tarot Card deck best describe Aries’s behaviors in life? In the sections that follow, we’ll zoom in on several aspects of Aries’s life and attempt to pick the most meaningful Tarot cards for Aries in those areas. 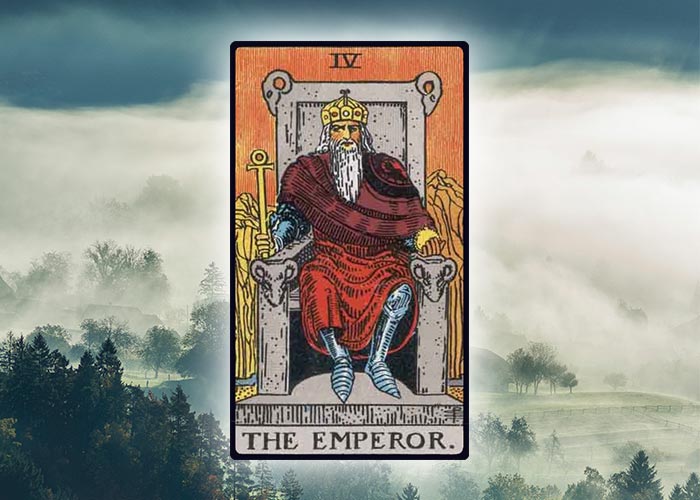 The Emperor is one of the first tarot cards that come to mind when thinking about cards that represent Aries’s personality. Out of all the Major Arcana cards in a tarot deck, the Emperor card is the main card that rules this fiery sign’s personality.

The Emperor has strong personality traits. It’s characterized by the need for independence and demand for authority. As one of the monarchs in the deck, The Emperor is very headstrong, the same is usually said about Aries. Both The Emperor and Aries are at their best in leadership positions.

The flip side of The Emperor is when thrown off balance, the approving authority figure can quickly turn into a hostile dictatorship. The Emperor indicates how easily Aries can come across as dominating. They will begin to become more forceful rather than helpful to others. Don’t forget that Aries is a born fighter–these rams are always ready for a good fight, verbally or physically!

Some implicit advice coming from The Emperor card is that Aries needs to keep themselves grounded and in check. They should take care and make sure they are leading–not controlling others who are under their watch.

Here are some of the keywords used to describe both the Emperor card and Aries personality: 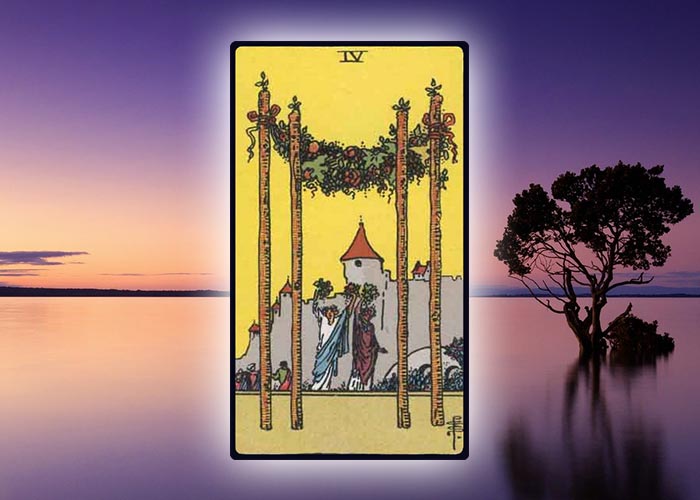 The tarot card that represents the love of Aries is the Four of Wands.

Aries is known for being passionate lovers. But one of the hidden aspects not often discussed is when in love, the passionate Aries tend to create solid grounds for their relationship to grow. Despite being a fire sign, they want things to remain stable and harmonious. That way, both they and their partner can feel secure together. Think of it this way: every fire needs fuel, and Aries understands fact.

Four of Wands can also mean celebration. An Aries in love is fun and generous with affection. They like to show their partner appreciation through celebration in the form of more affection, gifts, or romantic dates.

When not happy with their relationship or love life situation, Aries can quickly shut off. They will not display any affection and will no longer offer their support. Conflicts become much more likely to occur as well.

If Aries is not satisfied with their love life, don’t expect them to stick around for much longer. They will quickly leave and move on to finding something else. This is aligned with their cardinal fire sign nature which makes them more likely to initiate swift and substantial change.

Keywords used to describe the Four of Wands and how an Aries shows their love:

3. Family: The King of Pentacles 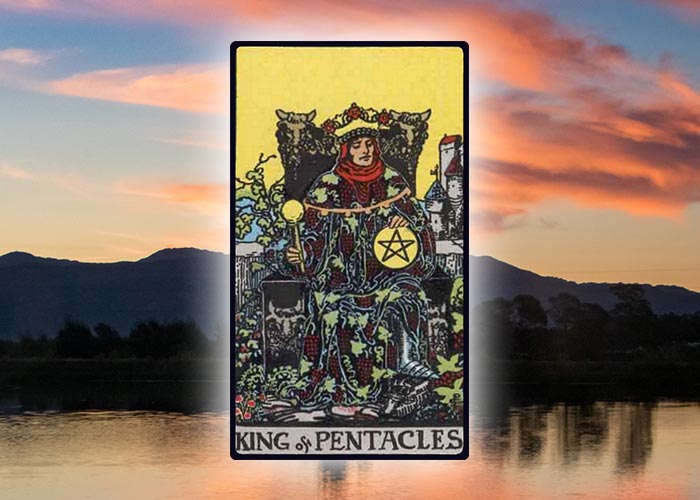 The King of Pentacles can be interpreted as a father figure who dutifully takes care of his family. This card also describes the role Aries typically plays when it comes to family matters. They work diligently to generate income for their family.

Both Aries and the King of Pentacles work hard to provide their family with what they need.

There can be an “I only look after myself” attitude when family life gets shaken up. When unwilling to provide for their family, Aries can begin to display some greediness. They may also take part in some excessive indulgence. Financial problems also tend to arise when an Aries family life becomes troubled.

Keywords used to describe the King of Pentacles and Aries approach to family matters:

4. Friendship: The Queen of Wands 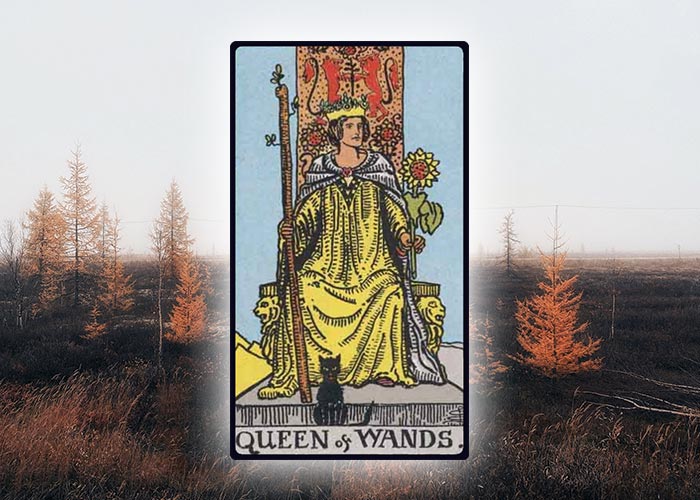 The Queen of Wands represents how Aries is with friendships. She is known as a social butterfly and has an upbeat vibe that affects those around her. Aries is there to fill their friends with optimism. They often encourage their peers to think positive thoughts, just as the Queen of Wands does.

The Queen of Wands also represents the fierce and courageous protector Aries is of their friends. When you have an Aries for a friend, you can count on them to make sure others know that you’re untouchable.

Sometimes, however, when someone begins to outshine Aries repeatedly, jealousy can arise. When they feel like they are getting cast into the shadows, it can cause them to feel insecure about themselves and their abilities. When that happens, it can lead to unhealthy introversion.

Keywords used to describe the Queen of Wands and what type of friend Aries can be: 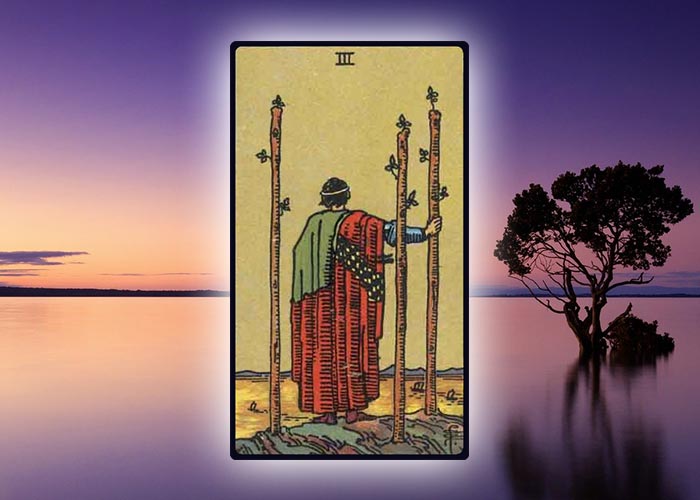 The Three of Wands represents Aries’s work and career. It signifies expansion and just how much things can grow when Aries is in a leadership position. Aries carefully plans ahead by using the foresight they obtain.

The Three of Wands also demonstrates Aries’s cooperative spirit in the workforce. Aries believes in the power of teamwork. They work alongside, not above, their fellow team members and coworkers.

When things are unbalanced at work, Aries can become very easily frustrated. Delay after delay may begin to occur, frustrating them even more. Aries needs to take care and plan ahead of time for their work matters. Doing so will ensure that everything runs smoothly.

Keywords used to describe the Three of Wands and Aries in the workplace:

In astrology, Aries is one of the fire signs, alongside Sagittarius and Leo. This means the Wands and Aries share a connection through the element of fire. That is why their descriptions match Aries so well.

These are some keywords that Aries, the Wands suit, and the fire element all share:

A few tarot cards match up well with the independent and strong-willed nature of the zodiac sign Aries. Each card represents the different areas in Aries’s life.

Major arcana card, the Emperor, embodies many of the personality traits seen in Aries. The Four of Wands shows Aries’s drive for stability to ensure their relationship can thrive.

Aries works hard to provide for their family, as represented by the King of Pentacles. The Queen of Wands reveals that Aries is an outgoing, encouraging, supportive friend.

Last but not least, the Three of Wands represents the strong leadership skills that come naturally to Aries. This says a lot about the zodiac sign’s career and suggests the kind of roles that work best for Aries.

Each of these cards represents an important part of Aries. They imply the independence and strength that this fiery sign has within them.