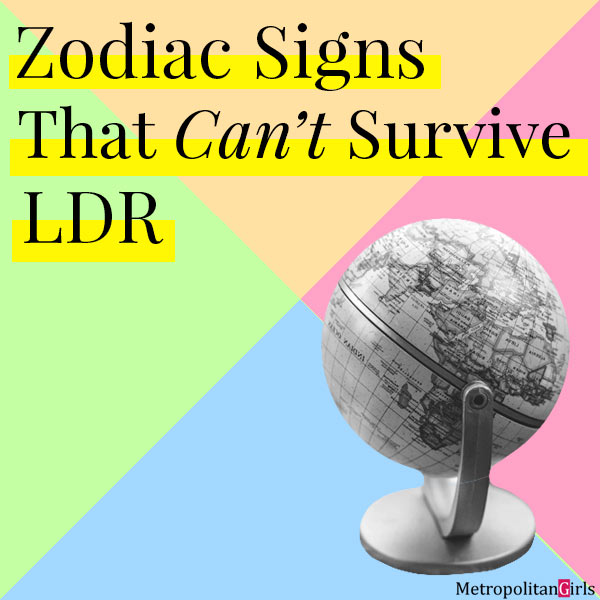 However, some people are able to make long-distance relationship work for them. With love and perseverance, individuals come out from an LDR with a happy ending. On the other hand, some people are just not suited for a distance romance. What astrology has to say about this topic?

The nature of the Scorpio is being passionate. They can also feel uneasy when it comes to not knowing what is going on. This is why they will probe into aspects of the lives of those who are important to them. Additionally, those with this sun sign can possess a strong trait of jealousy. Some amount of jealousy is a good way to let your partner know that you care about them more than just friends. But for Scorpio in LDR, their jealousy sometimes crosses over to the unhealthy territory. This is the reason why distance romance is often destined for a breakup for Scorpio.

The Scorpions’ passion is too strong to be away from those who they love, and are yearning to have a passionate one on one time with them. Secondly, the fact that their significant other would be away from them in another place would make them very uneasy because they would be worried that they could be veering off to someone else. They would easily get jealous at the idea of it a possibility. They have to be living in a city where they can be with their lover physically.

“We are the perfect couple, we’re just not in the perfect situation.” – More LDR quotes like this.

Libras are willing to make compromises so that their partners are happy. However, because they are extremely social, having distance partnership would be very difficult for them. They are the type that needs to share with their partner which would make living in a different place very challenging.

Libras want to share their time with their partners, and their idea of doing that is not nightly Skype calls. They need to be with them physically for that. For this reason, an LDR with a Libra is bound to fail.

This may surprise you since Aries is a very independent sign, but the truth is, those who have this sun sign are not as independent as you may think. Those with this sign are very passionate and are not patient enough to maintain a serious distance relationship.

At first, if the idea would be presented to them, they would try to be optimistic about the idea of it working out. However, over time, the Aries would lose his or her patience because of not being able to be physically near his or her partner at a time when they want to be. And this will become a major issue with the Aries. That means due to their lack of patience and intense passion, a long-distance romance would not work well for the Aries.

Those with the Leo sun sign are magnetic, charming, and have a lot of room for love in their hearts. However, they also hate being ignored and being away from someone who they care for deeply for long periods of time would make them very uneasy. And this is why Leo would not last very long in a relationship of this nature.

However, after a while, the Cancer would miss having the partner with them at home being able to cuddle up. A long-distance commitment is not bound to last for very long as a result.

Capricorn is at the last of the list because those with this sun sign would still have a hard time keeping a distance romance alive but at the same time, they may be able to make it last. It depends on what else is in the horoscope of the Capricorn’s natal chart. The Capricorn is naturally disciplined and organized. And those with this sign would find ways to square in time to see their significant other who lives in a faraway place.

However, because Capricorns strive for long-term relationships, where they want to have a future with someone who they are serious with – they will not stick around if their significant other that lives in another place that they are becoming serious with does not have plans to leave their city or country. That is unless the Capricorn will leave where he or she lives. But if not, then the relationship will not last.

If you look at what some of the signs have in common that will not likely last in an LDR, Aries, Cancer, Libra, and Capricorn are cardinal signs. Cardinal signs are starters. They initiate things, and if they no longer can handle staying involved in a distance romance, then they will be the first ones to cut it off.

Read also: Zodiac signs that are likely to survive LDR