What does Astrological studies and zodiac signs have to say regarding food? What zodiac signs or elements have the natural tendency to become food lovers? Find out more in this article. 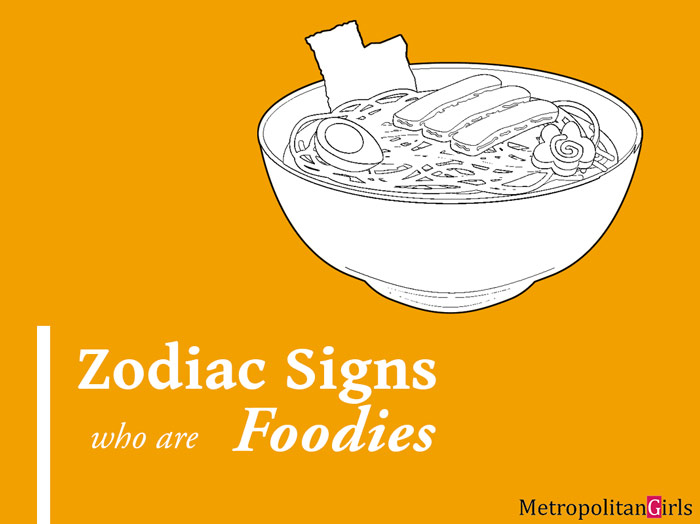 Are you the type that just loves to eat? Do you live to eat instead of the other way around? When you are at a social event, is the first thing that comes to your mind the food and drink that are served. When you think about this deeply you may think you are too gluttonous but that is a harsh way to describe yourself. You simply love food — you’re a foodie!

Not sure why you or someone else love food so much? Well, that might have something to do with their star signs. Stars and other heavenly bodies influence your personality and behavior — and that includes your preference for food.

Who are the biggest food lovers of the zodiac? What do the foodie signs have in common with each other? These are the zodiac signs that love their food according to Astrology.

Taurus is the sign that finds security anything that is material. The men & women who were born under the sign of the golden bull are drawn to things that they can feel, touch, and, well, eat. And this is the biggest reason that Taureans absolutely love their food. However, as much as they love to eat, they are still picky eaters because they only will eat food that is extremely delicious. This means that as much as a Taurus is looking forward to eating out at a restaurant or to an event, they will want to know what is being served ahead of time.

If foods that are being served at a restaurant don’t meet the Taurean’s standard, then they will not care to finish it. Taurus values delicious and high-quality food. If they eat a meal that is mediocre, then they will have felt that the meal (and subsequently their money, because they watch their money like a hawk) was wasted.

Taureans don’t usually like to try new things. They are the most comfortable when it comes to familiar routines. However, when it comes to trying out new restaurants that have received excellent reviews, they will get lured out of their comfort zone by the prospect of a good, satisfying meal. It’s not an exaggeration when we say that Taurus is the biggest foodie of all twelve signs.

Libras love delicious food the same way as Taurus. They also value high-quality and gourmet food. They will eat what they want and when they want it. Yes, the air sign can be impulsive.

This could mean if they want to have breakfast meals for breakfast and lunch, and snacks throughout the day until dinner time, they will. They also are big into having midnight snacks. Without a proper fitness routine to counter this impulsive behavior, some Libras may be prone to an increasing waistline.

Folks who are born under the sign of balance scale are known to be indecisive but not when it comes to food. They know how to make decisions quite well when it comes to them eating the foods they love.

However, their love for food is not so much due to a genuine affinity to it. They are known to be comfort eaters and they turn to food when they are very depressed or are very disappointed over something that went wrong. This means they will be the ones to eat an entire bag of chips or a store-bought cake after receiving bad news for self-soothing purposes.

This also means that they would prefer to eat for comfort than to do something else such as exercising or journaling to manage their emotions. This is why they often battle weight problems due to the fact that turning to food is how they cope.

Leos love to eat as well. But they are not the types to eat junk food and they are not known to be comfort eaters. They love to eat food that is expensive and only go for anything that is gourmet. Leos will not go for a fast food meal in their neighborhood the same way a Pisces would, especially for the purpose of self-soothing. The prideful Leos will order the most expensive meal or dessert on the menu because that is what they value.

That also means that when Leo is invited to an event, they will want to know what type of food is being served. If it is high-quality and gourmet, then they will jump at the opportunity to go. However, if the food does not sound overly impressive or exciting, then they will pass on the event.

Arians also love food and they are willing to try out different types of food. They also love eating spicy and exotic food as they are not afraid to experiment. They have hearty appetites and can eat 5 or 6 meals a day instead of the standard 3 meals. The fire sign is active both in their lifestyle and has a fast metabolism.

It’s worth mentioning that, Aries prefers not to try the same boring foods day after day.

Women & men who were born under this sign are the ones who fill up their grocery shopping cart with a large variety of exotic foods as they will not eat the same thing day after day and week after week. They will only eat the same thing again if it has been a while since they last ate whatever it was. This means if they had a spicy seafood linguine meal last week, then they will not go for it again for other several weeks.

Those with the Sagittarius sign love food that is foreign and exotic. They are not the type of eat for comfort — unlike Pisces.

They are adventurous eaters that are eager to try out the new restaurant downtown that serves different cultural cuisines.

This means they will not go for foods that are familiar to where they live.

They live for excitement and foods of foreign cultures are what turns the Sagittarius on the most.

If you notice similarities in this list, you will see that all fire signs made it to this list. They share the same type of enthusiasm for foods that are exotic and not familiar. Other similarities as that each sign in this list is ruled by the benefic planets which are Venus which rules both Taurus and Libra which rules beauty and the love for the material things. And Sagittarius and Pisces are ruled by Jupiter which rules optimism and expansion.

However, because Neptune also rules Pisces, that is why they are comfort eaters instead of those that eat for true pleasure as the other signs do. And if your sign is not on this list but you are a great food enthusiast, then look at your moon and rising sign. That plays a significant rule as well! Or if you find that the opposite is true as your sign is on the list but you aren’t a big eater, the same applies. Be sure to check out other Astrology articles.