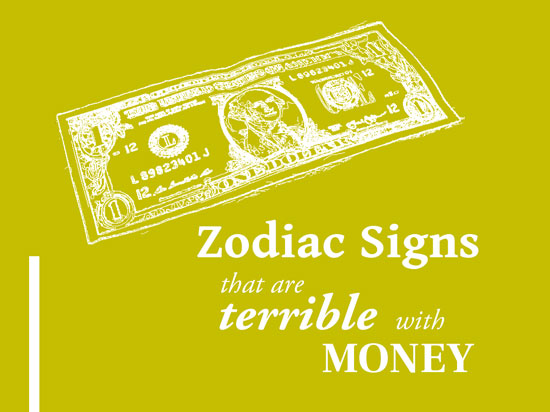 Some people are just not good with money naturally. It does not mean they are terrible at earning it, it means they are notorious for letting it slip away. These individuals will spend their money whether it was hard-earned or not at the drop of a hat.

They are the ones who are known to go broke quickly because of their terrible money management skill. You might be tempted to help them out by providing them with a small loan when they are desperate. But before you do that, just realize that they will not be able to pay you back and still be desperate because they’ve spent the money on something they simply want!

How do you know who are terrible at managing their money? By looking at their zodiac sign, of course. Below are some of the zodiac signs that are most likely to be bad at money management according to Astrology.

The thing about those with the Sagittarius sun sign is that they are generally hard workers and can earn a lot of money. That is not where they are lacking. However, they have an impulsive nature and a strong adventurous side. They will spend their hard-earned cash on products and services that they simply want and don’t need. If it appears to be appealing to them, they will spend that money just to get what they want.

The problem as well with those with this sun sign is that they become enthusiastic about something for a short time and will purchase something that they think is cool. However, the novelty wears off quickly and they will get bored. This is when that shiny new thing catches their eyes and the same thing happens again, and again, and again.

2. PISCES (February 19 – March 20)
Men & women of the sign of fish are terrible with money for different reasons than the Sagittarians are. Pisceans have bleeding hearts and will donate their last dollars to contribute to a cause or help someone in need. If you see someone giving money to a homeless person even though they don’t look that well-off themselves, then there is a good chance that the individual is a Pisces.

Pisceans put themselves last and that means they will give away their last dollars to help someone else in need – while forgetting that they have needs of their own.

And before they know it, they end up in a position where they need help financially themselves.

Aquarius gets excited by new & shiny gadgets. A majority of those who are camping out at Apple stores entrances are probably Aquarians because they want to get their hands on the latest iPhone. They don’t care that the price is way too high and will not wait for the price to come down. Because for Aquarians it’s new or never.

Any new device or gadget that is available for purchase, the Aquarian will be the one to go after it. In extreme cases, they will even spend their last dollars on it because they live for the latest technology and will not hold onto any gadget or device that is old.

It is ironic that Leos intend to be careful with their money. However, they have a soft spot. And that soft spot is their generosity when it comes to gift-giving. They want to be the ones known and remembered for giving the coolest gifts because that helps feed their ego. Additionally, they also will spend on self-care services such as spa and massage treatments often and if it means they will spend their last dollars so they can feel good, then they will.

Even though Leos have an intention to be careful with their money, their intention goes out the window if they see a gift for someone that they want to give or if they are in the mood for a spa treatment – which happens often.

Like Leo, the Libra has an intention to be money savvy to keep some money saved for a rough day. However, they often find that their bank accounts drain fast. That is because they either want to get gifts for people for similar yet different reasons than Leo. They are not doing so to fill their egos for the sake of it. Libra men & women want to be liked by everyone, and they don’t like the idea of being disliked. They will buy gifts to become more popular.

They also are attracted to the latest fashion trends. They are willing to spend a fortune on clothing and accessories. Their closets are likely to be full of new clothing because of their love for fashion. And the cost adds up fast.

Gemini has two sides. One side wants to put their save and invest their money for a rainy day, while the other side has a tendency to gamble. Unfortunately, the gambler’s side of them sometimes prevails. They will spend their hard-earned money on lottery tickets, as well as putting their money into investments that are high-risk. They will also be the ones that will visit casinos often. That means those who go to Las Vegas often would be Geminis.

They will spend their money on the high-cost Vegas hotels on the strip. As with all types of gambling, sometimes you win but most of the time you lose.

All three air signs are thought to be below average with how they handle their money. Air signs have active minds that come with impulsivity.

You also notice that there are no earth signs on this list because they are usually good at managing their personal finance. Earth signs are fiscally conservative and are less impulsive in nature. If you are good with your money and your sign is on this list, then look at your moon and rising signs! That would be why.

7 Zodiac Signs That Are Introverts

Who is the Best Friend for Every Zodiac Sign