If we’re talking about party games, one game will always come to mind and that is none other than the dark, offensive, and yet extremely hilarious card game, Cards Against Humanity (CAH). 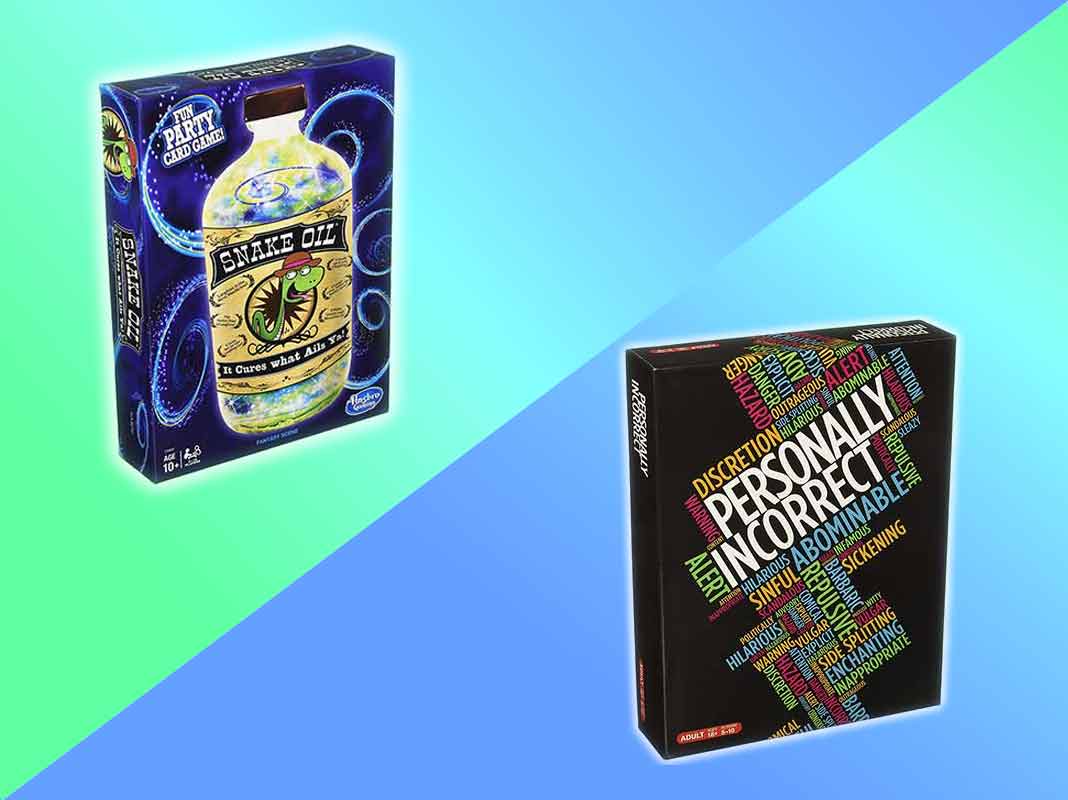 Unlike common card games, Cards Against Humanity is unique in such a way where the winner is “chosen” instead of having linear gameplay where the winner is all about who had the most luck or strategy. The way it works is on each turn, a player (Card Czar) draws a black card which contains a fill-in-the-blank question, and all the other players have a hand of white cards which contains words or phrases that they can use to complete the statement written on the black card. Whoever has the most hilarious statement (regardless of how real, raw, and offensive it is, which in most cases makes it even funnier) based on the Card Czar’s opinion will win. The game challenges the imagination and creativity of the human mind, so it’s no wonder how this game became such a hit especially in this day and age. With that, let’s take a look at some card games like Cards Against Humanity:- 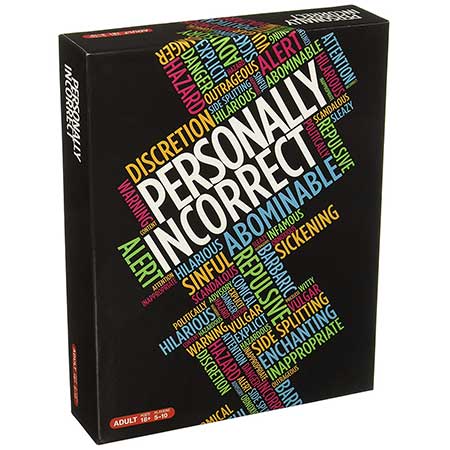 Personally Incorrect is a card game similar to Cards Against Humanity but with a twist. Each player gets a set of cards but this time, the question card has an “Insert name” tag in which you will need to insert one of the other players’ name into the card, making them the target of the humorous and inappropriate allegation that will soon develop. Unlike Cards against Humanity, each player has a “vote card” where they get to vote the best joke of the round, but the players can’t vote for their own jokes. After 10 rounds, whoever has the most points wins the game. Personally Incorrect is perhaps a game which no doubt takes its roots from Cards against Humanity, but the “naming” feature they added to it gives it a boost on the social aspect of the game which makes it ideal for parties. 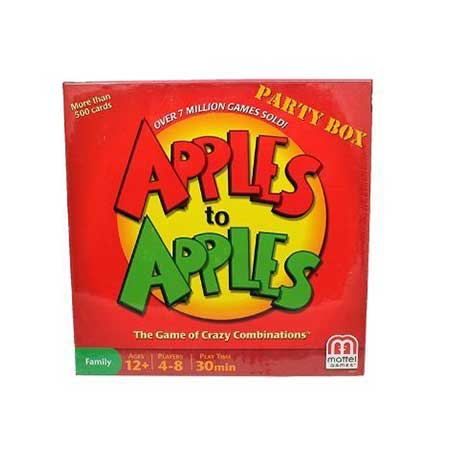 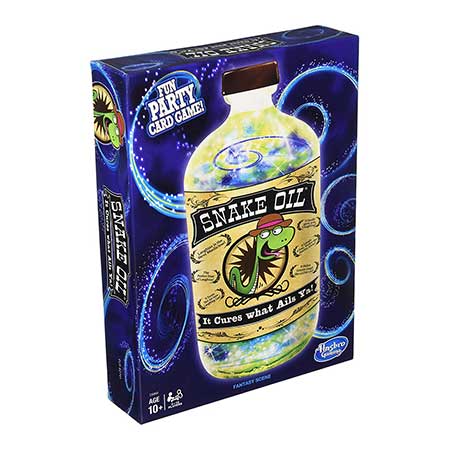 From the creators of Apples to Apples (see above) comes another amazing party card game that will challenge your creativity and wit. Snake Oil is a fun and casual party game just like Cards Against Humanity. In this game, one player selects a “customer card” per round which will be the “customer” for that round, to give you an idea, these customer cards can be a Pirate, a Pro-Wrestler, a Castaway, and so much more. Each of the other players gets six “word cards” on hand, in which they would need to create a product using two Word cards, think of maybe an Underwear Gun or a Cheese Closet, the possibilities are endless. The fun part starts where each player will need to make a sales pitch of their product to the customer. The round ends with the customer choosing which product he finds best. Snake Oil is a very creative game, which will definitely push you through the limits of your sales pitch (like how are you even going to sell something like a Cheese Underwear?), trying to make sense out of the product you’ve created is such a hilarious process that will get you hooked into this game in an instant! 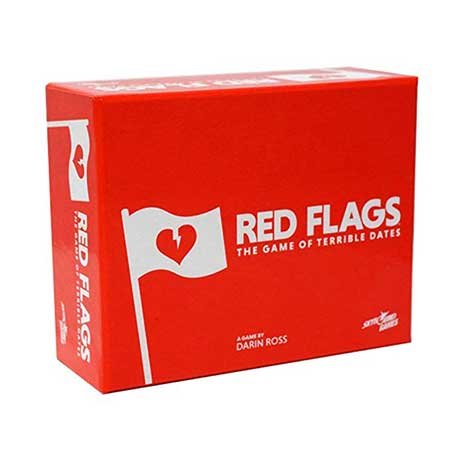 Red Flags is a fun card game about terrible dates. Quite similar to Snake Oil where you throw a sales pitch to other players, Red Flags is a game where each player gets a turn to be “The Single”. The other players get “perk cards” which basically tells what kind of person they are, it could be as simple as “loves videogames”, or as descriptive as “most physically attractive person you have ever seen”, each of them gets to present two perk cards to whoever is The Single. Now here’s the catch, starting from The Single’s left, a player plays a “Red Flag” card is played to the other player on their left. These Red Flag cards will contain downsides that will make the other players look ridiculous, and they will have to try to sell themselves to the Single. Red Flags is an incredibly fun game that can really bring out everyone’s dark sense of humor. After all, how are you even going to sell yourself as a Sexy Vampire who has the face of a pug? If you like Cards Against Humanity or Snake Oil, you’ll probably like Red Flags too. 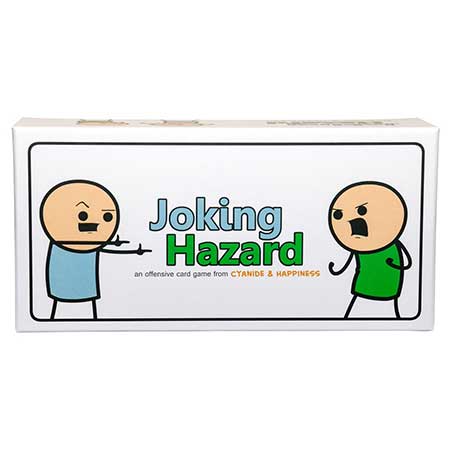 From the creators of Cyanide and Happiness, comes a card game that’s just as hilarious that you’ll hurt your jaw laughing. This game is a great way to spend a few hours just like Cards Against Humanity. If you’ve used the Cyanide and Happiness Web Comic generator before, the flow of the game will be somewhat familiar. The mechanics are simple: players will draw 7 cards off the deck and will choose a player that will act as a Judge. The judge then takes one card off the deck which will initiate the setup for the joke (note that it does not have to be the first panel of the joke). The judge then chooses a card in hand that will place it right beside the other card to form a complete setup. The other players will then play a card from their hand that will serve as the punchline for the joke. Whichever punchline tickles the Judge’s funnybones the most is the winner. Joking Hazard is a fun game, and if you’re not familiar with their humor, then you should check out their Cyanide and Happiness Shorts.

What Is Your Favorite Game Like Cards Against Humanity?

Did you find any games that interest you from the list above? Have you played any of these card games that are similar to CAH before? Which one of them do you think is closest to CAH and which is your favorite game to play?