Metropolitan Girls
Home Graduation Ravenclaw Scarf – Where to Buy, How to Make, and Trivia Facts

Graduates of the Hogwarts School of Witchcraft and Wizardry (HS of W&W) are allowed to keep their scarves and presumably robe after they complete their studies at the wizarding school. However, for one reason or another, you may find yourself in a situation where you’ll need to find a replacement or get the scarf as a gift for a fellow Ravenclaw supporter / Harry Potter fan’s birthday.

So many excellent designs that are inspired by the House of Ravenclaw. Check them out now.

This is the closest thing you can find to a Ravenclaw senior scarf on the internet. It features the signature uneven horizontal stripes sighted in the second half of the Harry Potter movies. The colors of the bands, of the rich and complex dark blue and less-assuming light gray, are exactly like what you see worn by senior Ravenclaw students in the films. The incredibly-detailed house crest patch is embroidered on the scarf. It is a much-needed feature used to identify your allegiance when you aren’t (mustn’t be!) wearing a crest-bearing robe in the Muggle world. 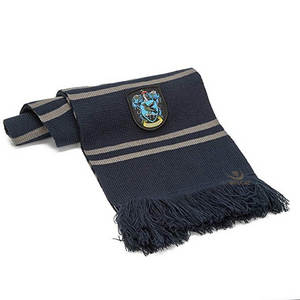 When Harry Potter first entered Hogwarts, he was shown wearing a Gryffindor scarf with equal horizontal stripes. A house scarf of that design is said to be a junior scarf — a scarf that is worn by junior Hogwarts school pupils. But you can absolutely wear this scarf as an adult, Newt Scamander — famed Magizoologist and the author of Fantastic Beasts and Where to Find Them, has been seen rocking a junior Hufflepuff scarf. 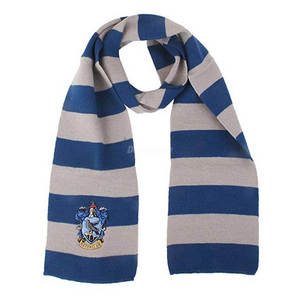 This 5-feet long scarf (about half a foot wide) is the best junior Ravenclaw scarf for kids. This knit scarf is warm, soft, and comfortable. The house crest is embroidered on one end of the scarf. A Ravenclaw outfit simply would not be complete without this crucial accessory! 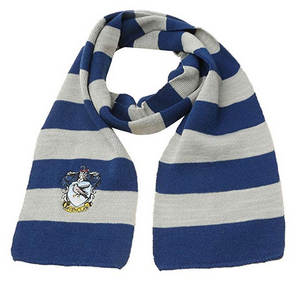 Harry Potter senior scarf with some small differences from the movie version: the narrow bands are light blue instead of gray, giving it less gloomy look. The embroidered house crest design looks intricate, as expected in an officially-licensed Harry Potter merchandise. 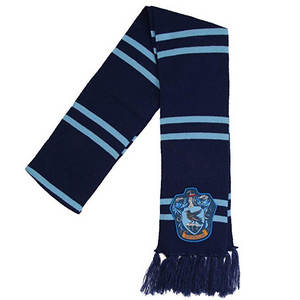 Light scarf with the house emblem printed. The design is inspired by the senior scarf. 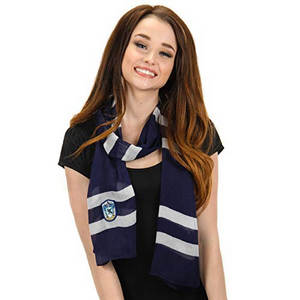 This reimagined Ravenclaw scarf design is bold in design and its use of colors. The colors it utilizes still fall on the spectrum of the official house colors of gray and blue but the contrasts have been made much stronger; this scarf’s color palette consists of white, light gray,  light blue, and blue, and black. The house crest is also vividly depicted in strong colors. 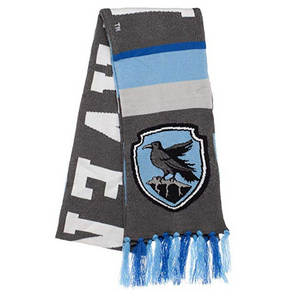 This is what you’ll be receiving during the first year at the school if Ravenclaw was a Greek house and Hogwarts was a stereotypical American party college. The scarf features the name Ravenclaw in bold, college-style font and the silhouette of a raven. It is reversible, meaning that you can wear it on both sides. Two colors, the Ravenclaw house colors — gray and dark blue, are found on the scarf. Note that you may be flexing your magical pride a little bit too much in Muggle world by wearing this scarf. You may get a sternly-worded letter from the Ministry of Magic. 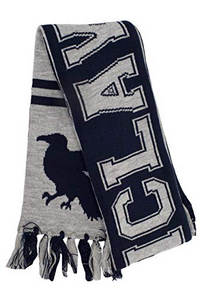 Thick knitted scarf ala infinity. It features the official Ravenclaw house crest. The horizontal stripes and colors of the scarf closely follow the senior scarf in the movie. 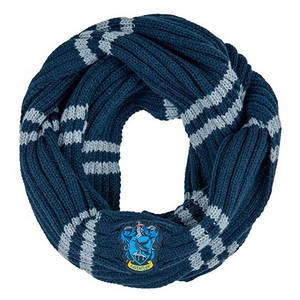 Made of viscose. This scarf is in various shades of blue and features the famous Ravenclaw crest design from the movie — the one with a proud raven. This is a lightweight infinity scarf that is perfect for spring, fall, and friendlier winter. 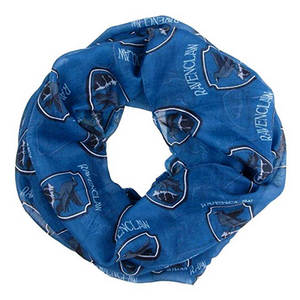 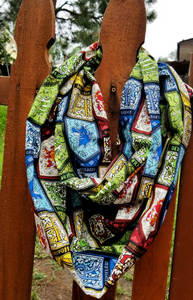 Ok so you may have noticed that there’s no scarf in this gift set, but don’t they look amazing? A definite must-have for all Ravenclaw alumni, especially those who live their lives mainly in the Muggle world but still want to (subtly) show some wizarding love for their House. 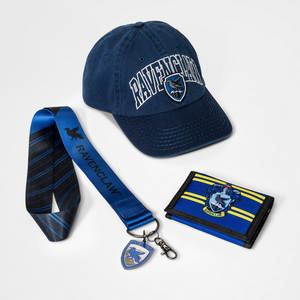 For folks who are into knitting, below are some resources that will help you get started on making your very own Ravenclaw knit scarf.

Personally, I think the change was made to distinguish Ravenclaw from Hufflepuff’s color scheme of black and gold. Gold closely resembles bronze in knit scarves and black may appear as dark gray which could look just like dark blue on the movie screen.

There are two scarf designs featured in the movies. One is said to be a junior scarf, seen in the earlier movies. The other one is a senior scarf, found in the second half of the series. The junior scarf features horizontal stripes in alternating house colors — so blue, silver, blue, silver, and so on. Each band is of equal height, I estimate it to be about 3 inches or 10 cm tall. Overall the junior scarf has a youthful more cartoonish look to it. The senior scarf on also features horizontal stripes in house colors, but the bands are no longer equally tall. The bands in the darker color, which in Ravenclaw’s case is dark blue, are much wider than the lighter-colored bands, giving it a more mature, darker look.

Note that in the movies, the scarves don’t seem to have the house emblems embroidered on them like what is commonly found in the scarves found on a muggle marketplace such as Amazon.

Fun Facts about the House Scarves and Ravenclaw

HP scarf trivia you may or may not know about.

One fun fact I came across while researching for this article is that apparently the house scarf was never mentioned in the original Harry Potter books. However, it is most likely considered canon because J.K. Rowling mentioned Newton Scamander’s Hufflepuff scarf in the screenplay for Fantastic Beasts and Where to Find Them.

Also, the house animal is an eagle instead of a raven because the name Ravenclaw originates from its founder Rowena Ravenclaw and has no direct link to a raven. However, the film’s version of the house crest does feature a raven instead of an eagle. See the eagle Ravenclaw crest on Pottermore.

10 College Graduation Quotes that Will Keep You Inspired